Is the Tribulation Near?

A recent World Net Daily article shouts the question, "WILL TRIBULATION BEGIN A YEAR FROM NOW?"

Pastor Mark Biltz authored the article and I view him with great respect for his discovery of the "blood moons" phenomena back in 2008 well before anyone else was speaking about it.  In his tribulation article, Pastor Biltz makes note of several factors suggesting that the end is near and the tribulation is about to begin:

During the day, I lead a team of data analysts and use earthquake data as an example in some of our discussions.  There has not been a huge jump in the number of major earthquakes.

The chart references the US Geological Survey (USGS) website so I went there and pulled down the data (again) for myself.

Here is what I found between 1900 and 2014 (you can click on the images to enlarge them for better viewing): 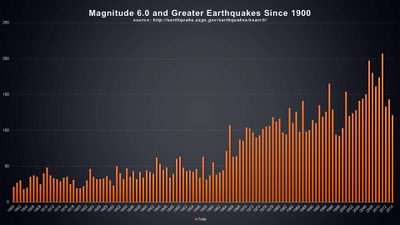 Hmmm... it sure looks like there has been a big increase in 6.0+ earthquakes but it goes back to 1964.  I was curious so I dug a little deeper and broke out the data by magnitude. 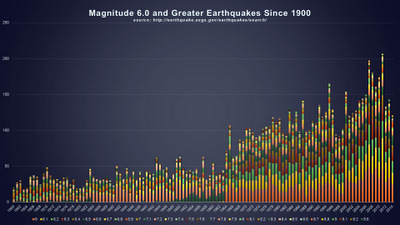 Interesting... there's a lot more orange (magnitude 6.0) quakes after 1964 but that can be attributed to three things:

If we pare the data down to the "big quakes" that are 7.0 and greater we find a different picture. 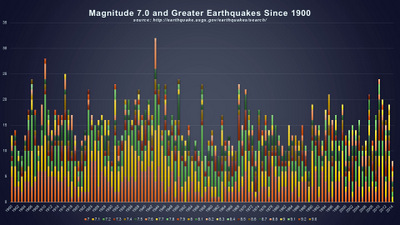 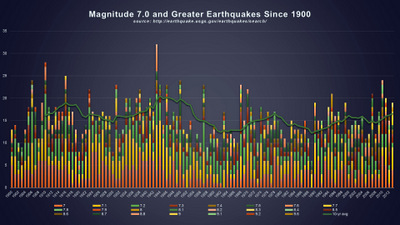 Based upon the 10-year average, it seems like the number of big quakes has decreased over the past century.  Let's add a line for comparison. 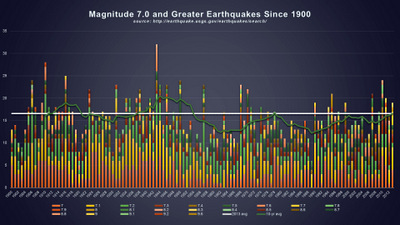 Well... maybe it's the severity.  Maybe they aren't happening any more often but when they do, they're bigger. 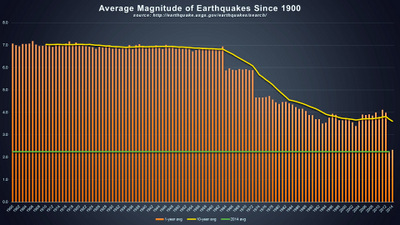 Hmmm... no.  If anything, it looks like the average magnitude is getting smaller.

In reality, this last chart falls into that profound observation about "lies, damned lies, and statistics".  The only reason the average magnitude is going down in the chart is because there are larger and larger numbers of smaller quakes being recorded: 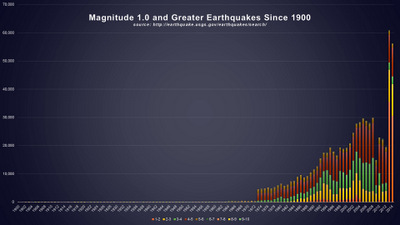 As you can see, beginning in 1974 they've been capturing enormous amounts of data for quakes that are less than 6.0 in magnitude.  When you average in the magnitudes of all of those smaller quakes then the overall average magnitude appears to be dropping.  It's really not.

Here is what the USGS has offered on the subject:

Although it may seem that we are having more earthquakes, earthquakes of magnitude 7.0 or greater have remained fairly constant.

A partial explanation may lie in the fact that in the last twenty years, we have definitely had an increase in the number of earthquakes we have been able to locate each year. This is because of the tremendous increase in the number of seismograph stations in the world and the many improvements in global communications. In 1931, there were about 350 stations operating in the world; today, there are more than 8,000 stations and the data now comes in rapidly from these stations by electronic mail, internet and satellite. This increase in the number of stations and the more timely receipt of data has allowed us and other seismological centers to locate earthquakes more rapidly and to locate many small earthquakes which were undetected in earlier years. The NEIC now locates about 20,000 earthquakes each year or approximately 50 per day. Also, because of the improvements in communications and the increased interest in the environment and natural disasters, the public now learns about more earthquakes.

So... earthquakes aren't getting any more frequent or any more severe.

On that particular point, World Net Daily and the good pastor are off the mark.  What about all the other factors?  Well... that's a topic for a different article.

For now, let us remain serious and sober awaiting the Lord's return and not get too spun up about all of this:

More in this category: « Balancing Wealth and Humility? A Fitbit For Your Spiritual Health »