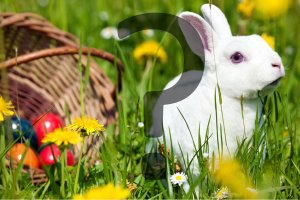 Based on the success of our December article, "Why We Do Not Celebrate Christmas," the Psalm11918.org team has put together an article of similar observations focused on the celebration of Easter.

Here are our top 10 reasons why we do not celebrate Easter:

10. Easter originated out of hate.

Early in the history of the church, it was widely accepted that the Lord's Supper (the breaking of unleavened bread at Passover) was a practice of the disciples and a recognized tradition. However, a dispute arose concerning the date on which Pascha (Easter) should be celebrated. This conflict came to be known as the Easter/Paschal controversy. Bishop Polycarp of Smyrna, a disciple of John the Evangelist, disputed the computation of the date with Bishop Anicetus of Rome, specifically as to when the pre-paschal fast should end.

The practice in Asia Minor at the time was that the fast ended on the fourteenth day of Nisan, strictly in accordance with the Hebrew calendar and the commandment of Scripture. The Roman practice was to continue the fast until the following Sunday. One objection to the fourteenth of Nisan was that it could fall on any day of the week. The Roman church wished to associate Easter with Sunday and sever the link to Jewish practices.

According to Eusebius, (Life of Constantine, Book III chapter 18[13]), Emperor Constantine I declared: "Let us then have nothing in common with the detestable Jewish crowd; for we have received from our Savior a different way." However, the custom of Christians and Jews joining in the Passover feast seems to have persisted, as Saint John Chrysostom found it necessary to condemn such inter-faith activities in his sermons. "The very idea of going from a church to a synagogue is blasphemous," he declared, and "to attend the Jewish Passover is to insult Christ."1

What we discover is the fact that in Christian theology, Easter has as its very foundation a hate motif that the hierarchy of the Roman church wished to show toward the Jewish people and to the biblical festival called Passover.2

9. Easter is a traditional Catholic celebration.

Easter is a Roman Catholic holy day and was established by the authority of the Catholic church at the 4th-century Council of Nicea: http://www.newadvent.org/cathen/05224d.htm

Consider the references in Scripture to the area of Nicea (also known as Bithynia) and how the Spirit of Yeshua leads Paul away from the area.

While we have nothing against Catholics as individuals, we aren't Catholic and don't participate in Catholic celebrations. 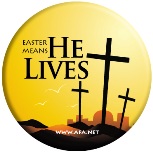 An email from The American Family Association entitled "Wear 'em and Share 'em this Easter season" prompted us to write this article.  In the email, the AFA is promoting buttons and stickers proclaiming, "Easter means He Lives."

Etymology is the study of the origins and meanings of words. The word origins site, Online Etymology Dictionary, provides this definition and background for "Easter":

O.E. Eastre (Northumbrian Eostre), from P.Gmc. *Austron, a goddess of fertility and sunrise whose feast was celebrated at the spring equinox, from *austra-, from PIE *aus- "to shine" (especially of the dawn). Bede [a 7th-century Christian scholar] says Anglo-Saxon Christians adopted her name and many of the celebratory practices for their Mass of Christ's resurrection. Ultimately related to east. Almost all neighboring languages use a variant of Latin Pasche to name this holiday.3

7. Easter is not the date of Messiah's Resurrection.

Messiah was resurrected three days after Passover (Hebrew: Pesach). Passover falls on the same Hebrew date every year: the 14th of Nisan.  Messiah resurrected on Nisan 17. See our article on When Yeshua was Crucified for more details about how Scripture records these dates.

The official date of Easter, on the other hand, is the first Sunday strictly after the "Paschal full moon" (for example, if the Paschal full moon falls on a Sunday, Easter is the following Sunday).

Just like birthdays and wedding anniversaries fall on different days of the week, the day of the anniversary of Messiah's resurrection is tied to the date of Passover rather than a specific day of the week. There is one circumstance when the two may overlap: when Passover falls on Wednesday.

In the 3rd century, some Catholic bishops in Gaul, wishing to escape the difficulties of the paschal computation, seem to have assigned Easter to a fixed date of the Roman calendar, celebrating the death of Christ on March 25, His Resurrection on March 27, since already in the third century March 25th was considered the day of the Crucifixion.4

The current calendar date for Easter was selected purely to avoid celebrating the event near Passover. The Catholic church excommunicated anyone who continued to observe Passover as the time of the crucifixion.5

If we truly are attempting to celebrate the resurrection of the Savior of all humanity shouldn't we pick the right date; especially since we know when it is?

Scripture never records either Jesus or any of His disciples as celebrating Easter or any of the traditions associated with it.  We have more on this particular point here.

"Be careful to listen to all these words which I command you, so that it may be well with you and your sons after you forever, for you will be doing what is good and right in the sight of the LORD your God. When the LORD your God cuts off before you the nations which you are going in to dispossess, and you dispossess them and dwell in their land, beware that you are not ensnared to follow them, after they are destroyed before you, and that you do not inquire after their gods, saying, 'How do these nations serve their gods, that I also may do likewise?' You shall not behave thus toward the LORD your God, for every abominable act which the LORD hates they have done for their gods; for they even burn their sons and daughters in the fire to their gods. Whatever I command you, you shall be careful to do; you shall not add to nor take away from it." (Deuteronomy 12:28) [emphasis added]

As children get older, they realize that all of the fluff (pun intended) associated with Easter is fiction. They come to recognize that the blessings and gifts they receive do not come from Peter Cottontail (the Easter bunny) but instead come from their parents. They also realize that their parents lied to them and everybody seems to be OK with that. They perpetuate the same lies on their own children and their parents, friends, and family all nod their heads and smile knowingly but nobody seems willing to address the lie.

Somehow, if you have warm fuzzy feelings about something, then that justifies lying. G-d is not a liar. Satan is the father of lies (John 8:44).

You tell me.  Where do you think we're getting this stuff?  It's not from the Bible.

The focus throughout Scripture is on Christ's sacrificial death, burial, and resurrection and the redemption that His work provides.  By focusing on all of the unbiblical traditions associated with new life (green plastic grass, rabbits, chicks, eggs, gifts, and all the other non-Christ-focused elements usually associated with Easter), we lose sight of the whole point: Messiah!  By accepting these pagan traditions and the lies associated with them, we obscure G-d's plan and damage our witness to the lost.

2. Easter is a tradition of men.

Messiah spoke in unyielding terms to condemn those who transgress the commandments of G-d to uphold the traditions of men (see Matthew 15 and our article about traditions). Easter is entirely a tradition and not commanded (or even mentioned!) anywhere in Scripture. If we celebrate Easter and yet ignore the holy days that G-d has commanded us to keep then aren't we heaping upon ourselves the same condemnation of "hypocrites!" that Christ gave in Matthew 15?

Shouldn't we instead try (as best we are able) to honor those days that G-d has declared to be holy?

1. Easter is not part of G-d's ordained pattern of worship.

"But an hour is coming, and now is, when the true worshipers will worship the Father in spirit and truth; for such people the Father seeks to be His worshipers. (John 4:23)

Our Master tells us that we are to worship G-d in Spirit and truth. Such are the people the Father seeks to worship Him.

Easter is not from the Spirit of G-d but consists of idolatrous, pagan traditions that G-d has commanded His people not to perform.

Easter is not filled with truth but with lies that parents tell their children and each other.

Easter is almost entirely celebrated instead of the holy days G-d has ordained. Doing this puts us into the category of "hypocrite" that Christ condemned.

Think about the path that our nation has taken while celebrating Easter over the past century. Consider G-d's words from 2 Chronicles:

[If] My people who are called by My name humble themselves and pray and seek My face and turn from their wicked ways, then I will hear from heaven, will forgive their sin and will heal their land.

Consider also the words of the prophet Micah:

He has told you, O man, what is good; And what does the LORD require of you but to do justice, to love kindness, And to walk humbly with your God? (Micah 6:8)

Please come quickly, Lord Yeshua, and show all of Your people how we should properly honor You!