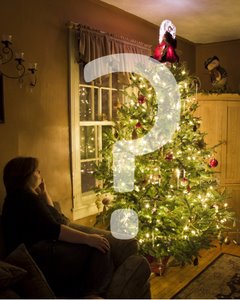 Other readers may come here seeking "ammunition" to use against family, friends, or coworkers in a battle of words and wits to prove that Christmas is a pagan holiday and celebrating it is evil and a sin against G-d.  If this is you, may I also offer you "shalom and welcome" and mention that beating someone over the head with the facts will almost never win them over to your side.  As always, our focus should be on Messiah Yeshua and on dealing with the "logs" in our own eyes first before dealing with the splinter in our brothers' eyes (Matthew 7:3).

May Paul's words to Timothy continue to guide and encourage us today:

The Lord's bond-servant must not be quarrelsome, but be kind to all, able to teach, patient when wronged, with gentleness correcting those who are in opposition, if perhaps God may grant them repentance leading to the knowledge of the truth, and they may come to their senses and escape from the snare of the devil, having been held captive by him to do his will. (2 Timothy 2:24-26)

With that being said let's get on to the list...

Using the cliche "Top 10" countdown, here are some reasons why our family (and others) do not celebrate Christmas. Thanks to JD Hudgens for asking the question and inspiring this article and to Scott Ashley for his original expression of some of the points below.

10. Christmas of today is driven by materialism.

Try this test and see which causes the greatest uproar in your home:

a) Tell your spouse and kids that none of you are going to church or putting up the crèche/nativity display this year for Christmas.

b) Tell your spouse and kids that none of you are going to put up a Christmas tree/lights/decorations or receive Christmas gifts this year.

This question reveals the true focus of Christmas (especially for children): materialism. Christmas is primarily about getting stuff.

In contrast, Scripture tells us:

Then Jesus said to His disciples, "If anyone wishes to come after Me, he must deny himself, and take up his cross and follow Me." (Matthew 16:24)

9. Christmas is a traditional Catholic celebration.

Modern-day Christmas (i.e. Christ's Mass) is Roman Catholic in its origins and is often attributed to the 4th-century pope, Constantine: http://www.newadvent.org/cathen/03724b.htm

While we have nothing against Catholics as individuals, we aren't Catholic and don't participate in Catholic celebrations.

The Twelve Days of Christmas? Originally the (pagan) "twelve days of yule": http://www.helium.com/items/1384974-the-origin-of-yule

Santa Claus/St. Nicholas?
Nicholas of Myrna was a real man, a bishop in Asia Minor, who was reportedly loved by his neighbors and was kind to children.  The gift-giving, red-garbed, white-bearded, overweight, "jolly old elf" with magical powers (flying reindeer, levitating through chimneys, covers the entire world and ~1 billion households in 24 hours)? Pagan: http://www.orlutheran.com/html/santa.html

As a consequence of these pagan origins, Christmas was actually outlawed in England for a time: http://www.newworldencyclopedia.org/entry/Christmas#The_Reformation_and_modern_times

It was also banned in America: http://www.apuritansmind.com/puritan-worship/christmas-and-the-regulative-principle/once-upon-a-time-when-christmas-was-banned-by-c-danko/

We did an analysis of the most popular Christmas songs and found they have almost nothing to do with the birth of Messiah!

7. Christ was not born on or near December 25th.

Most scholars and historians agree that December 25th is not the date of Christ's birth. Unfortunately, they do not agree on what the date of His birth truly is, either.

Early records indicate that Egyptian believers celebrated it around the end of May:

The first evidence of the feast is from Egypt. About A.D. 200, Clement of Alexandria (Stromata I.21) says that certain Egyptian theologians "over curiously" assign, not the year alone, but the day of Christ's birth, placing it on 25 Pachon (20 May) in the twenty-eighth year of Augustus. [Ideler (Chron., II, 397, n.) thought they did this believing that the ninth month, in which Christ was born, was the ninth of their own calendar.]1 [emphasis mine]

December 25th was primarily chosen due to the existing pagan celebration of Dies Natalis Invicti:

The Dies Natalis Invicti was probably first celebrated in Rome by order of the Emperor Aurelian (270-5), an ardent worshipper of the Syrian sun-god Baal. With the Sol Invictus was identified the figure of Mithra, that strange eastern god whose cult resembled in so many ways the worship of Jesus, and who was at one time a serious rival of the Christ in the minds of thoughtful men.2

The well-known solar feast, however, of Natalis Invicti, celebrated on 25 December, has a strong claim on the responsibility for our December date [for Christmas].3

If we truly are attempting to celebrate the birth of the Savior of all humanity shouldn't we actually try to pick the right date?

Although Scripture records the events of Christ's birth, it never records Jesus or any of His disciples as celebrating Christmas or performing any of the activities associated with it.  Check it out for yourself and read more on this point.

"Be careful to listen to all these words which I command you, so that it may be well with you and your sons after you forever, for you will be doing what is good and right in the sight of the LORD your God. When the LORD your God cuts off before you the nations which you are going in to dispossess, and you dispossess them and dwell in their land, beware that you are not ensnared to follow them, after they are destroyed before you, and that you do not inquire after their gods, saying, 'How do these nations serve their gods, that I also may do likewise?' You shall not behave thus toward the LORD your God, for every abominable act which the LORD hates they have done for their gods; for they even burn their sons and daughters in the fire to their gods. Whatever I command you, you shall be careful to do; you shall not add to nor take away from it." (Deuteronomy 12:28) [emphasis mine]

As children get older, they realize that the stories about Santa, elves, flying reindeer, and Santa's north pole workshop are all fiction.  They come to realize that their parent's hard work (and self-sacrifice) was the source of their Christmas toys.  They also understand that their parents lied to them and everybody seems to be OK with that.  They perpetuate the same lies with their own children and their parents, friends, and family all nod their heads and smile knowingly... but nobody corrects the lie.

Somehow, if a person has warm fuzzy feelings about something, then that justifies lying.  G-d is not a liar. Satan is the father of lies (John 8:44).  You tell me: where do you think they are getting this?

Throughout Scripture, the focus is on Christ's sacrificial death, burial, and resurrection and the redemption that His work provides. By focusing on Messiah's birth (and the non-Christ-focused traditions usually associated with Christmas), we lose sight of the reason why He was born.  By mixing in pagan traditions (above) and the lies associated with them, we damage our witness as individuals and as a whole to those who are unsaved thus further obscuring G-d's plan for them.

2. Christmas is a "tradition of men".

Messiah spoke in unyielding terms to condemn those who transgress the commandments of G-d to uphold the traditions of men (see Matthew 15 and our article about tradition).  Christmas is a man-made tradition which is not commanded (or even mentioned!) anywhere in Scripture.  If we celebrate Christmas and yet ignore the holy days that G-d has commanded us to honor and keep then aren't we heaping upon ourselves the same condemnation of "hypocrites!" that Christ gave in Matthew 15?

Shouldn't we instead try (to the best of our ability) to honor those days that G-d has declared to be holy?

1. Christmas is not part of G-d's ordained pattern of worship.

"But an hour is coming, and now is, when the true worshipers will worship the Father in spirit and truth; for such people the Father seeks to be His worshipers. (John 4;23)

Our Master tells us that we are to worship G-d in Spirit and truth. Such are the people the Father seeks to worship Him.

Christmas is not from the Spirit of G-d but consists of pagan traditions that G-d has commanded His people not to follow.

Christmas is not filled with truth but with lies that parents tell their children and each other.

Christmas is almost entirely celebrated instead of the holy days G-d has ordained.  Doing this places us into the category of "hypocrite" that Christ condemned.

Think about the path our nation has taken while celebrating Christmas over the past century. Consider G-d's words from 2 Chronicles:

[If] My people who are called by My name humble themselves and pray and seek My face and turn from their wicked ways, then I will hear from heaven, will forgive their sin and will heal their land. (2 Chronicles 14)

But if you turn away and forsake My statutes and My commandments which I have set before you, and go and serve other gods and worship them, then I will uproot you from My land which I have given you, and this house which I have consecrated for My name I will cast out of My sight and I will make it a proverb and a byword among all peoples. (2 Chronicles 19-20)

Do we find ourselves arguing to justify behavior that Scripture condemns?  Consider the words of the prophet Micah:

He has told you, O man, what is good; And what does the LORD require of you but to do justice, to love kindness, And to walk humbly with your God? (Micah 6:8)