In the beginning God created the heavens and the earth.

בּראשׁית (bereshit) literally means "in the beginning". It is pronounced bear uh SHEET. It is formed from a feminine Hebrew noun reishit (Strong's #7225 which means "beginning") and the Hebrew prefix given by the Hebrew letter bet (meaning "in"). Reishit shares a root word with the Hebrew noun rosh which means "head". This root word means "to shake" (as the head is shaken). The word reishit is used 58 times in 49 verses in the Tanakh.

The first time reishit is used in Scripture is in the beginning of this parashah: Genesis 1:1.

The last time reishit is used in Scripture is in Micah chapter 1.

Harness the chariot to the team of horses, O inhabitant of Lachish-- She was the beginning of sin To the daughter of Zion-- Because in you were found The rebellious acts of Israel.

Our words are an expression of our thoughts and our inner being. Just as we speak words to express ourselves, so G-d also spoke and expressed Himself into the void during Creation. He "sent forth" His Word to create and express Himself. One expression of Himself was the perfect version of Creation that existed during the first week:

G-d saw all that He had made, and behold, it was very good.

Another expression of Himself is the form of a man, Messiah Yeshua.  John 1 begins with a description of Messiah as "The Word of G-d" who was present with G-d in the beginning [bereshit].

The Gospel accounts begin in Matthew 1 with one of the two genealogies of Messiah found in Scripture (the other is found in Luke 3:23-38). It is interesting that the Gospels begin with a genealogy of Messiah because the Torah also begins with a genealogy of sorts. Genesis 2:4 begins "This is the account of the heavens and the earth...". The Hebrew word for "account" is toledot which means "history" or "genealogy". In Genesis 5:1 this same word is translated as "generations" in describing Adam's genealogy.

It has been noted by various Hebrew language scholars that the first verse of Scripture includes a word that is not directly translated into English: et. The verse begins bereshit bara Elohim et ha'shamayim v'et ha'eretz... The word et in Hebrew is used to point to the object that is receiving the action of the verb. In this case it is "the heavens and the earth" that receive the action of G-d's creative work.

The et is the formed by the Hebrew letters aleph and tav, the first and last letters of the Hebrew alphabet. One idea that may be present in this verse is that G-d created the Hebrew language by speaking it and through it He created the heavens and the earth. The verse does not literally say that but the idea is present by the Hebrew wording.

We examine the use of et in our article Cain, the Messiah? and the Mystery of ET.

If we pair the days of Creation (as in the table below) we can see that G-d created something and then later filled it or brought it to its fullness. 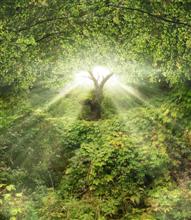 G-d placed Adam in the garden after He had formed him thus we know that Adam was not created in the Garden.