These are the records of the generations of Noah. Noah was a righteous man, blameless in his time; Noah walked with God.

The name of this week's parashah, נח, (Noach) comes from the Hebrew root word for "rest" and refers to the Patriarch of the Flood. It is (Strong's #5146) and the word is used 46 times in 39 verses in the Tanakh. All of these instances refer to the man spoken of in this week's parashah.

The first time Noach is used in Scripture is in Genesis 5:9.

The last time Noach is used in Scripture is in Ezekiel 14:20.

"Or if I should send a plague against that country and pour out My wrath in blood on it to cut off man and beast from it, even though Noah, Daniel and Job were in its midst, as I live," declares the Lord GOD, "they could not deliver either their son or their daughter. They would deliver only themselves by their righteousness." 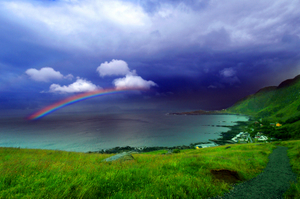 The ark of Noach's Flood is a portrait of Messiah. Consider these parallels:

In the seventh month, on the 17th day of the month, the ark rested upon the mountains of Ararat.

What's so important about that date?

Before G-d established the beginning of the calendar year for the Israelites with their Exodus from Egypt (in Exodus 12:2) the calendar year was reckoned as beginning with Creation. Hence this verse is telling us that in the seventh month of the 600th year (Genesis 7:6) of Noach's life in the seventh month the ark rested in the mountains of Ararat.

What's so important about the seventh month? Here is a list of the Hebrew months in a calendar that begins with Creation:

We see that the seventh month from Creation is the month of Nisan... the month in which Pesach occurs. The 14th day of Nisan is Passover (Exodus 12:1-11). We know that Messiah was slain on Pesach. 1 Corinthians 5:7 calls Him "our Passover".

Noach is the first parashah named after a person. It is interesting to note that the person that is the focus of this parashah is considered by Scripture to be a righteous man. Sarah's name is also included in a parashah name as are Yitro, Korach, Balak, and Pinchas.

Below is a chart of the antediluvian (pre-Flood) forefathers. It lists when they were born and when they died, when their firstborn son was born, and how long between when they died and the Flood. (Click the chart to enlarge it.) 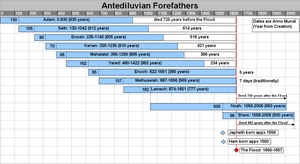