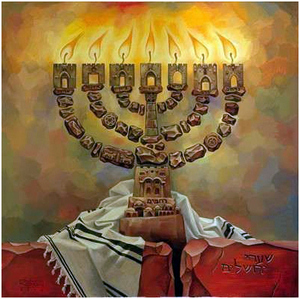 G-d gave a revelation of the end of time to Yochanan.  This revelation is recorded in the book that is named Revelation.  In that book it is written:

After these things I looked, and behold, a door standing open in heaven, and the first voice which I had heard, like the sound of a trumpet speaking with me, said, "Come up here, and I will show you what must take place after these things." Immediately I was in the Spirit; and behold, a throne was standing in heaven, and One sitting on the throne. And He who was sitting was like a jasper stone and a sardius in appearance; and there was a rainbow around the throne, like an emerald in appearance. Around the throne were twenty-four thrones; and upon the thrones I saw twenty-four elders sitting, clothed in white garments, and golden crowns on their heads. Out from the throne come flashes of lightning and sounds and peals of thunder. And there were seven lamps of fire burning before the throne, which are the seven Spirits of G-d;

Let us take a journey together through Scripture and see what it says about the seven Spirits of G-d... a "walk in the Word" so to speak. As we take this walk, may we say, believe, and do what is right, be merciful in our speech and actions, and walk humbly with the Lord (Micah 6:8).

Let's begin our journey by examining the very first passage in Scripture that explicitly speaks of the seven Spirits of G-d:

To the angel of the church in Sardis write: He who has the seven Spirits of G-d and the seven stars, says this: 'I know your deeds, that you have a name that you are alive, but you are dead.

Who is speaking in this passage? In the NASB this verse is entirely in red which indicates the words of Yeshua. This is confirmed by going back to the end of Revelation chapter 1 where the One speaking to Yochanan identifies himself as "the first and the last, and the living One; and I was dead, and behold, I am alive forevermore..." (Revelation 1:17). The reference to "He who has the seven Spirits of G-d" in 3:1 is Yeshua speaking of Himself. Yeshua has the seven Spirits of G-d.

In Matthew 3:16, Mark 1:10, and Luke 3:22 we are given the parallel accounts of Yeshua's mikvah [immersion/baptism] by Yochanan and subsequent annointing of the Holy Spirit which came in the form of a dove. All of these passages refer to "the" Spirit of G-d using the singular noun and a definite Greek article to. In John 1:32 John also testifies that he seen this and uses the same singular Greek noun for Spirit: pneuma.

So what is this? Yeshua is given the Spirit and gets the seven Spirits as a package deal?  Let's continue searching...

The last direct reference in Scripture to the seven Spirits of G-d is also found in the book of Revelation:

And I saw between the throne (with the four living creatures) and the elders a Lamb standing, as if slain, having seven horns and seven eyes, which are the seven Spirits of G-d, sent out into all the earth.

Those of you with small children you may be familiar with the Blue's Clues cartoon on Nickelodeon. When I read the passage above I had a "Blue's Clues" moment: "a clue! a clue!".

A Stone with Seven Eyes

'For behold, the stone that I have set before Joshua; on one stone are seven eyes. Behold, I will engrave an inscription on it,' declares the LORD of hosts, 'and I will remove the iniquity of that land in one day.

In this passage we see a stone with seven eyes. This actually makes sense when we consider that many passages in Scripture describe Messiah using the imagery of a stone. Paul uses this stone imagery of Messiah as a stone in a passage that explains why Isra'el of his day stumbled in their pursuit of righteousness:

Israel, pursuing a law of righteousness, did not arrive at that law. Why? Because they did not pursue it by faith, but as though it were by works. They stumbled over the stumbling stone, just as it is written, "BEHOLD, I LAY IN ZION A STONE OF STUMBLING AND A ROCK OF OFFENSE, AND HE WHO BELIEVES IN HIM WILL NOT BE DISAPPOINTED."

The section of the verse that is in all caps contains quotes from the prophet Yesha'yahu:

Therefore thus says the Lord GOD, "Behold, I am laying in Zion a stone, a tested stone, A costly cornerstone for the foundation, firmly placed. He who believes in it will not be disturbed.

Then He shall become a sanctuary; But to both the houses of Israel, a stone to strike and a rock to stumble over, And a snare and a trap for the inhabitants of Jerusalem.

These passages are often related to a similarly phrased verse in Psalms:

The stone which the builders rejected Has become the chief corner stone.

This is a passage used by the Master himself at the close of the parable of the vineyard  (Matthew 21:33- 46).  One additional passage came to mind relating to Messiah pictured as a "stone":

"You continued looking until a stone was cut out without hands, and it struck the statue on its feet of iron and clay and crushed them. Then the iron, the clay, the bronze, the silver and the gold were crushed all at the same time and became like chaff from the summer threshing floors; and the wind carried them away so that not a trace of them was found. But the stone that struck the statue became a great mountain and filled the whole earth.

This passage from the book of Dani'el relates a prophecy that was given to King Nebuchadnezzer regarding the kingdoms of the world. It speaks of the Messiah who is to come and restore the world to its proper order.

There is one additional passage that speaks of "seven eyes" that is also from the prophet Zecharyiah:

"For who has despised the day of small things? But these seven will be glad when they see the plumb line in the hand of Zerubbabel-- these are the eyes of the LORD which range to and fro throughout the earth."

Here again we see "seven eyes" but in this passage the "these seven" refers to the seven lamps that are set on a lampstand with seven spouts belonging to each of the lamps (Zechariah 4:2). This fits perfectly with Scriptural symbology. Lamps use oil (hence the overflow spouts) and oil is symbolic of the Spirit of G-d.

The Spirit of G-d

Let's shift gears a bit and examine Scripture for passages that directly refer to G-d's Spirit. The very first passage in Scripture that speaks of G-d's Spirit is Genesis 1:2. In this verse we are told "the Spirit of G-d was moving [hovering?] over the surface of the waters". This initial reference from the story of Creation is definitely referring to a singular Spirit.

Now the LORD spoke to Moses, saying, "See, I have called by name Bezalel, the son of Uri, the son of Hur, of the tribe of Judah. I have filled him with the Spirit of G-d in wisdom, in understanding, in knowledge, and in all kinds of craftsmanship, to make artistic designs for work in gold, in silver, and in bronze, and in the cutting of stones for settings, and in the carving of wood, that he may work in all kinds of craftsmanship.

G-d filled Betzal'el with his Spirit "in wisdom, in understanding, in knowledge...". This phrasing is repeated in Exodus 35:31 where Scripture again speaks of Betzal'el. It is also found in Isaiah chapter 11 where it speaks of Messiah:

It is here that we find the seven Spirits enumerated!

These are the Seven Spirits of G-d.