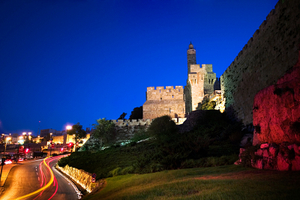 For millennia, the city of Jerusalem has been the focus of numerous kingdoms, stunning idolatry, horrendous wars, and the national capital of Israel and their worship of G-d.  The timeline below covers a period from around 2,000 BCE to modern times and reflects the group or nation that had control of the city of Jerusalem.  The timeline does not reflect exact dates but only general time periods.

The people of Israel are commanded to "seek the LORD at the place which the LORD your God will choose from all your tribes, to establish His name there for His dwelling, and there you shall come."  (Deuteronomy 12:5)

Jerusalem is that place where G-d guided Solomon to construct a Temple for the LORD:

Then Solomon began to build the house of the LORD in Jerusalem on Mount Moriah, where the LORD had appeared to his father David, at the place that David had prepared on the threshing floor of Ornan the Jebusite. He began to build on the second day in the second month of the fourth year of his reign.  (2 Chronicles 3:1-2)

We highly recommend you view the timeline in a maximized window.  You can drag the timeline horizontally, use your mouse-wheel, or use your cursor keys to scroll through it.

You can also click on individual events for more details.

Many thanks go to JD Hudgens who inspired this work.  We dedicate it to JD's newborn son, Aaron Michael Hudgens, who was born today (09-16-2012).