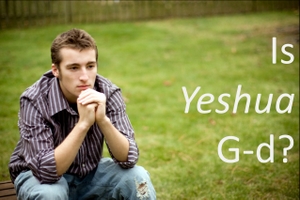 A: Yeshua's FLESH is not G-d, however, Yeshua's SPIRIT is G-d.

Consider these words of Paul:

See to it that no one takes you captive through philosophy and empty deception, according to the tradition of men, according to the elementary principles of the world, rather than according to Christ. For in Him all the fullness of Deity dwells in bodily form, and in Him you have been made complete, and He is the head over all rule and authority; and in Him you were also circumcised with a circumcision made without hands, in the removal of the body of the flesh by the circumcision of Christ; having been buried with Him in baptism, in which you were also raised up with Him through faith in the working of G-d, who raised Him from the dead.

Yeshua tells us that G-d is spirit and we should worship Him in Spirit and Truth (John 4:24).
The Colossians passage above states that the fullness of Deity (G-d) was in Yeshua... in His body.

We believe both are correct. G-d is spirit and it was that spirit that was within the physical body of Yeshua. Just as you have a spirit and I have a spirit, it was G-d's very spirit that was within the body of Yeshua. Yeshua's flesh is not G-d since at some point in time that flesh did not exist and at another point that flesh died and was later resurrected. G-d was not "born". G-d did not "die". Although Mary gave birth to Yeshua's flesh, she was not the "mother of G-d". Worshiping Yeshua's flesh as G-d would be idolatry.

For more information on this subject you can read our article, Is Yeshua God?