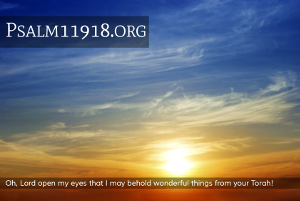 Our blog provides the Psalm11918.org contributors with a channel for less formal communications with our readers.  Some of our blog entries are about personal events while others are just plain silly and fun.

In any case, we hope you enjoy and are blessed everything you find here! :)

The Hebrew word for "atonement" (kippur) literally means "a covering" but in the context of the Levitical priesthood and sacrifices it has to do with ritual cleansing.  The root word, kopher, means "a ransom".  The "kippur"/atonement offerings are literally the ransom or price of ritual cleansing... and that ransom involves blood.

In Leviticus 14:52 the blood of a bird is used to cleanse a house with "leprosy":

My Daughter’s Emotional Moment About Modesty

My precious daughter (a senior attending a local high school) came home one day with tears in her eyes.

"Sweetheart, what’s wrong?", I asked and gave her a hug.

"Do you want to talk about it?"

"Okay.  I love you and I want to help in any way I can. Just let me know," I said with another brief hug.

I began to turn away but was immediately engulfed in a 30-minute, non-stop, emotionally-charged account of a heated conversation between three of her close friends that resulted in all three of them being mad at her and each other. It all stemmed from a single question one of the girls had asked about someone completely unrelated to their group.

The Final Search for Chametz

The day of Passover begins tonight at sundown and the seder meal occurs tomorrow evening.  All of the preparations for the moed of Pesach should be complete except for one: the final search for chametz/leaven.

Was Yeshua's Divinity Invented After His Death?

As I've previously written, the question of Messiah's divinity has been asked and answered: yes, Yeshua is G-d's Word in the flesh.  As Scripture itself declares,

Earlier this week, HarperOne (which is owned by HarperCollins, the parent company of Zondervan) published a 416-page book by Bart Ehrman entitled "How Jesus Became God- The Exaltation of a Jewish Preacher from Galilee".  In his book, Ehrman expands upon many of the same arguments that critics have been exercising for the past century or more:

What's Hollywood's Problem With the Bible?

Movieguide.org recently released their 2014 annual report and made the observation that for the first time in their 22-years of reporting, religious, family-friendly, and patriotic movies made up nine of the top ten grossing movies in 2013. They found the top movies with faith-centered themes of redemption earned over 400% more on average than those with a non-Christian worldview. It would seem that Hollywood has taken note and they're beginning to deliver more of what Christians want.