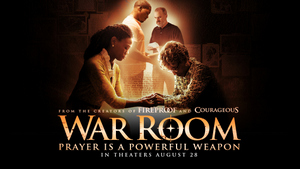 This past weekend the movie "War Room" was released and I greatly enjoyed watching it with my bride. It was our first "date night" since our kids moved to college.

This is an inspiring and encouraging movie that does credit to the Kendrick brothers' continuing legacy of family-friendly and faith-friendly films. I laughed, I cried, er, had some sinus trouble in the dusty theater.  Two thumbs up!

Just because a movie is "faith-friendly", however, doesn't always mean it is 100% Biblically accurate. Before recommending it to others, I share a few items of concern that I think are worth mentioning.

There is an age old concept that every bad thing that happens in our lives is the result of the "The Devil" doing X, Y, or Z.

Grandpa has lung cancer? That's the Devil at work!

Little Jenny has a cold? The Devil did it!

Uncle Bob is in jail for selling crack? The Devil made him do it!

This kind of flawed thinking attempts to absolve humanity of any responsibility for our actions.

As far as we know from Scripture, Satan is a finite creature limited to being in one place at one time. We also know that some bad things are the result of our own bad choices (like getting lung cancer as a result of smoking for 50 years). The main female character in the movie (Elizabeth Jordan) appears to embrace the idea that The Devil (i.e. Satan) is actively involved in messing with her life. Demons? Mayyyybe. Is there a spiritual component to her troubles? Absolutely... but "The Devil"? Unlikely.

Throughout the period of history covered by the Bible (about 4,000 years), we only find 3 people speaking directly with Satan: G-d (see Genesis, Job, etc), Eve (look how that turned out!), and the angel Michael (Jude 9). After reading James 4:7 [Submit therefore to God. Resist the devil and he will flee from you], Mrs Jordan decides she wants to have a conversation with HaSatan and give him a piece of her mind including a sassy repartee at the end ("Oh, and another thing..."). "Resisting the devil" means turning our eyes, hearts, and hope to G-d and ceasing from sin. It doesn't mean starting a dialog with the enemy of humanity!

When our Lord and Savior, G-d in the flesh, had a brief discussion with Satan during His temptation in the wilderness (Matthew 4, Luke 4, and Mark 1:12-13) it was only to respond with words of Scripture.

No servant is greater than his Master (John 13:16)... surely we should do no more than our Messiah!

The third issue is a pet peeve of mine: context.

This movie is a call to a strong, active prayer life...I get it. And I can definitely see the appeal of closing the film by quoting 2 Chronicles 17 ["If my people who are called by my name..."] but why must people take that verse out of its context?

Let's revisit that context for a second...

After Solomon constructs the first Temple in Israel, G-d speaks to him:

Then the Lord appeared to Solomon at night and said to him, "I have heard your prayer and have chosen this place for Myself as a house of sacrifice. If I shut up the heavens so that there is no rain, or if I command the locust to devour the land, or if I send pestilence among My people, and My people who are called by My name humble themselves and pray and seek My face and turn from their wicked ways, then I will hear from heaven, will forgive their sin and will heal their land. Now My eyes will be open and My ears attentive to the prayer offered in this place. For now I have chosen and consecrated this house that My name may be there forever, and My eyes and My heart will be there perpetually. As for you, if you walk before Me as your father David walked, even to do according to all that I have commanded you, and will keep My statutes and My ordinances, then I will establish your royal throne as I covenanted with your father David, saying, 'You shall not lack a man to be ruler in Israel.'

But if you turn away and forsake My statutes and My commandments which I have set before you, and go and serve other gods and worship them, then I will uproot you from My land which I have given you, and this house which I have consecrated for My name I will cast out of My sight and I will make it a proverb and a byword among all peoples. As for this house, which was exalted, everyone who passes by it will be astonished and say, 'Why has the Lord done thus to this land and to this house?' And they will say, 'Because they forsook the Lord, the God of their fathers who brought them from the land of Egypt, and they adopted other gods and worshiped them and served them; therefore He has brought all this adversity on them.'"
(2 Chronicles 7:12-22)

G-d sets up some pretty simple "If A then B" logic here:

IF G-d shuts up the heavens (or commands the locust to devour the Land or sends a pestilence among Israel) and
IF the Israelites humble themselves and
IF pray in the Temple (see v15) and
IF they seek G-d's face
THEN He will hear from heaven, forgive their sin, and heal their land (i.e. the Land of Israel).

There is no asterisk in Scripture that says *oh, and by the way, if any OTHER nation wants to pray in some generic location, I'll heal their land too. Offer limited to 48 contiguous states and not valid in Uzbekistan (sorry, Uzbekistan!)

This flawed idea has its origins in replacement theology which has no place among believers.

Aside from these few issues this movie is a BAZILLION times better than 99.9% of what normally shows at the theaters!

Armed with these words of caution, enjoy the movie!  :)

Last modified on 05 September 2015
Tagged under

More in this category: « Protecting Our Children Life and Death »