The Gettysburg Address and the Bible

In the chilly afternoon of an early winter, Abraham Lincoln delivered an address to those assembled at a field near Gettysburg, Pennsylvania.  His speech has become one of the most renowned in our nation's history.  It was the Gettysburg Address. 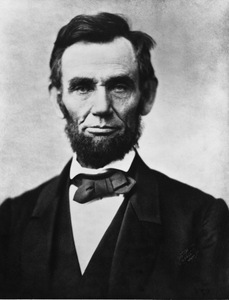 Four score and seven years ago our fathers brought forth on this continent, a new nation, conceived in Liberty, and dedicated to the proposition that all men are created equal.

Now we are engaged in a great civil war, testing whether that nation, or any nation so conceived and so dedicated, can long endure. We are met on a great battle-field of that war. We have come to dedicate a portion of that field, as a final resting place for those who here gave their lives that that nation might live. It is altogether fitting and proper that we should do this.

But, in a larger sense, we can not dedicate -- we can not consecrate -- we can not hallow -- this ground. The brave men, living and dead, who struggled here, have consecrated it, far above our poor power to add or detract. The world will little note, nor long remember what we say here, but it can never forget what they did here. It is for us the living, rather, to be dedicated here to the unfinished work which they who fought here have thus far so nobly advanced. It is rather for us to be here dedicated to the great task remaining before us -- that from these honored dead we take increased devotion to that cause for which they gave the last full measure of devotion -- that we here highly resolve that these dead shall not have died in vain -- that this nation, under God, shall have a new birth of freedom -- and that government of the people, by the people, for the people, shall not perish from the earth.

There are numerous, emotionally stirring recitations available online but my favorite version is a compilation of narrators focused on preventing a casino from being built only a 1/2 mile from the Gettysburg National Military Park (at the bottom of the page).

Gettysburg and the Bible

As I researched the history of this epic speech, I made a startling discovery.  Lincoln was not the first to use the phrase "government of the people, by the people, for the people".  It is actually found in a much older source that predated Lincoln by almost 500 years: it was found in John Purvey's 1832 prologue of the Wycliffe English Bible, one of the earliest English-language Bibles in the world:

John Wycliffe, sometimes called the "Morning Star of the Reformation" declared, "The Scriptures are the property of the people and one which no party should be allowed to wrest from them…Christ and his apostles converted much people by uncovering of scripture, and this in the tongue which was most known to them.  Why then may not the modern disciples of Christ gather up the fragments of the same bread?  The faith of Christ ought therefore to be recounted to the people in both languages, Latin and English."1

When did we as a nation of believers lose sight of such history and G-dly wisdom?

Wycliffe believed fervently in the centrality of Scripture in the lives of all believers... not just an educated clergy.  Regarding the grace of G-d and His commandments, Wycliffe famously said:

God gives His grace to whomever He wishes, and has predestined each individual, an eternity before birth, to be lost or saved through all eternity. Good works do not win salvation, but they indicate that he who does them has received divine grace and is one of the elect.

May our nation once again become devoted to G-d and find that the Bible, G-d's Word, is the only thing suitable for the government of the people, for the people, and by the people.

1. Wycliff's Introduction to the Bible taken 11/23/2013 from http://faithofgod.net/compare/Wyc_introduction.htm  [back]
Tagged under

More in this category: « How to Forgive We Don’t Do Valentine’s But We Still Love You! »