Cargo Cult: Not By Works…

A cargo cult is a religious practice that has appeared in many traditional tribal societies in the wake of interaction with technologically advanced cultures. The cults focus on obtaining the material wealth (the "cargo") of the advanced culture through magic and religious rituals and practices. Cult members believe that the wealth was intended for them by their deities and ancestors. Cargo cults developed primarily in remote parts of New Guinea and other Melanesian and Micronesian societies in the southwest Pacific Ocean, beginning with the first significant arrivals of Westerners in the 19th century. Similar behaviors have, however, also appeared elsewhere in the world.

Cargo cult activity in the Pacific region increased significantly during and immediately after World War II, when the residents of these regions observed the Japanese and American combatants bringing in large amounts of material. When the war ended, the military bases closed and the flow of goods and materials ceased. In an attempt to attract further deliveries of goods, followers of the cults engaged in ritualistic practices such as building crude imitation landing strips, aircraft and radio equipment, and mimicking the behaviour that they had observed of the military personnel operating them. 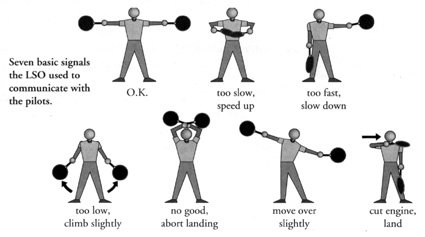 Signals from a Landing Signals Officer

Many believers in Messiah have this "cargo cult" mentality.  They see the blessing that G-d has poured out on His chosen people, Israel, and think, "If I do what the Jews are doing then I will also receive the blessing which they are receiving!"
Consider the signals shown in the graphic to the right.  The Landing Signals Officer performs these movements in order to assist aircraft landings.  After the aircraft lands there are "blessings" (food, goods, and materials) that come forth from the aircraft.  Someone who was unaware of the truth might think that these movements cause the blessings to occur.  "If I make these movements then the blessings come", or so their thinking goes.
Those with the "cargo cult" mentality are unaware of two things:
G-d has an existing relationship with Israel.  He chose her as a bride from among every tribe, people, nation, and tongue (Deuteronomy 10:15).  If we as gentiles are part of Israel (grafted in as Paul puts it in Romans 11) then we can participate in that existing relationship.
G-d also chooses who He will bless and when.

G-d is not required to bless us if we "wave our arms a certain way".  He is soveriegn and will bless whomever He chooses.
We should respond to G-d's commandments as part of the Commonwealth of Israel (Ephesians 2:11-13) because we have that relationship not because we expect G-d's blessing as a result... and not because we are acting like a cargo cult.

For by grace you have been saved through faith; and that not of yourselves, it is the gift of God; not as a result of works, so that no one may boast.  (Ephesians 2:8-9)

Now to the King eternal, immortal, invisible, the only God, be honor and glory forever and ever. Amen.
<><
Tagged under

More in this category: « Channukah Cards and Messianic Art SacredName.com »