By His Stripes We Are Healed

"But He was wounded for our transgressions, He was bruised for our  iniquities: the chastisement of our peace was upon him; and with his stripes we  are healed."- Isaiah 53:5

I was thinking of this passage this morning as I was wrapping tefillin.  For  those of you who aren't familiar with tefillin they look like this: 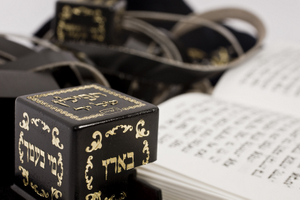 Tefillin are little leather boxes with long leather straps that contain 4 passages of Scripture (the 4 passages where God commands us to "bind them as a sign upon your arm and let them be tefillin upon your forehead").  They are wrapped around the arm and the head during morning prayers as an act of loving obedience and faithfulness to God.

As I was wrapping the strap of the tefillin upon my arm I noticed something interesting.   I was no longer able to see some of the scars and moles I had on my arms.   It was as if those imperfections had been "healed"... at least in the sense that they were no longer visible.

It is very likely that Messiah wrapped tefillin.  They were commonplace in his time and it was the long established chalakah for Jewish men.  Messiah even provides a word of correction for the scribes and the Pharisees of his day regarding their tefillin in the writings of Matityahu [Matthew] 23:5.  His correction is not that they were wearing them... but for broadening them in order to be seen by men!

Part of Yeshua's unfailing faithfulness and obedience to the commandments (the very thing that qualified him to be the Messiah) was his obedience in the matter of tefillin. It was (in part) by his obedience in this matter that He fulfilled the requirements of Messiah.  By his sinless, righteous death, burial, and resurrection we can be assured that the work God has performed through him is enough to pay for our sins: to heal us in the most important way... in our relationship with God.

Now, as I wrap tefillin in the mornings I reflect on how my Master, Yeshua, must have done the very same thing many times in his life.   I wonder if He ever thought about a man who would seek to follow him far in the future and how His own faithfulness in wrapping tefillin would impact the life of this future man.

"By His stripes we are healed", indeed.

Last modified on 16 January 2017
Tagged under

More in this category: « New article- Speaking In Tongues Joining the ranks of the bar mitzvah'ed »