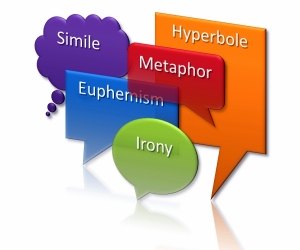 There are various figures of speech found in most languages including English, Hebrew, and Greek.  The words of Scripture convey a specific message by using these forms of language.  This short list of figures of speech (with examples from Scripture) was taken from a sidebar in the January/February 2008 edition of Biblical Worldview Magazine.  The article was entitled "A Beginner's Guide to Biblical Prophecy".

We should recognize these figures of speech in G-d's Word to understand the meaning G-d intended to convey whether we are studying Biblical prophecy or Biblical history.

The statement directed at the dry bones is an apostrophe.

A euphemism is substituting a more agreeable or indirect expression for something unpleasant or offensive.

They went on stoning Stephen as he called on the Lord and said, "Lord Jesus, receive my spirit!" Then falling on his knees, he cried out with a loud voice, "Lord, do not hold this sin against them!" Having said this, he fell asleep. (Acts 7:59-60)

Stephen did not "fall asleep".  Acts uses that euphemism to indicate Stephen died.

Hyperbole is a deliberate exaggeration used for emphasis.  The Psalms provide our example.

Although a person might cry copiously, "streams" is definitely an exaggeration.

Interrogation occurs when a question is posed that has only one obvious answer.  The prophet Jeremiah provides an example of this.

The obvious answer is no but in asking the obvious question, G-d makes His point clear: nothing is too difficult for Him.

When words are used to convey the opposite of their literal meaning then irony is present.  David's wife Michal uses ironic speech to mock her husband.

But when David returned to bless his household, Michal the daughter of Saul came out to meet David and said, "How the king of Israel distinguished himself today! He uncovered himself today in the eyes of his servants' maids as one of the foolish ones shamelessly uncovers himself!"  (2 Samuel 6:20)

Michal was angry at her husband's behavior and spoke ironically of how David "distinguished" himself by dancing before G-d wearing a linen ephod.

Metaphors are implied comparisons of two or more things that are like each other in some way. The purpose of using a metaphor is point out the similarities (or differences) between the two things.

One example of this is found in the gospel of John when Messiah offers this statement:

I am the door; if anyone enters through Me, he will be saved, and will go in and out and find pasture. (John 10:9)

This figure of speech occurs when one word or phrase is substituted for another with which it is closely associated. One example is found in Paul's second letter to the believers in Corinth.

But to this day whenever Moses is read, a veil lies over their heart... (2 Corinthians 3:15)

Moses, the person, is not read but the books of Moses (Genesis through Deuteronomy) are ready weekly in the synagogue.

Personification is used when the writer speaks about (not to) a non-person or non-living thing as though it were a person. Our example comes from Deuteronomy.

Give ear, O heavens, and let me speak; And let the earth hear the words of my mouth. (Deuteronomy 32:1)

The earth (a planet of metals, minerals, and dirt) cannot hear as a person can.

Similes are like metaphors except the comparison of two or more things is explicit. The words "like" or "as" may be used. These types of expressions are used throughout Scripture. Here is just one example:

Leviathan's heart is not literally as hard as a stone. If it were then it could not beat and pump his blood.  Instead, it is a comparison that shows Leviathan, like a stone, is without compassion.

This figure of speech enables a part of something to refer to the whole or the whole for a part, the specific for the general, or the general for a specific. For example, ten sail for ten ships or King David for the nation of Israel. A Scriptural example is found in the book of Jeremiah.

For behold, I am beginning to work calamity in this city which is called by My name, and shall you be completely free from punishment? You will not be free from punishment; for I am summoning a sword against all the inhabitants of the earth," declares the LORD of hosts.' (Jeremiah 25:29)

The "sword" in this example represents the entire army of Nebuchadnezzar... something much greater and more terrifying than just a single sword.