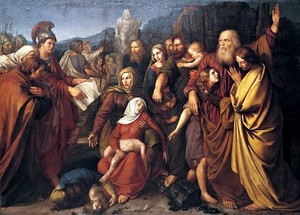 1 After Alexander son of Philip, the Macedonian, who came from the land of Kittim, had defeated King Darius of the Persians and the Medes, he succeeded him as king. (He had previously become king of Greece.) 2 He fought many battles, conquered strongholds, and put to death the kings of the earth. 3 He advanced to the ends of the earth, and plundered many nations. When the earth became quiet before him, he was exalted, and his heart was lifted up. 4 He gathered a very strong army and ruled over countries, nations, and princes, and they became tributary to him. 5 After this he fell sick and perceived that he was dying. 6 So he summoned his most honored officers, who had been brought up with him from youth, and divided his kingdom among them while he was still alive. 7 And after Alexander had reigned twelve years, he died. 8 Then his officers began to rule, each in his own place. 9 They all put on crowns after his death, and so did their descendants after them for many years; and they caused many evils on the earth.

Matityahu and His Sons

2 In those days Matityahu son of Yochanan son of Shimon, a priest of the family of Joarib, moved from Yerushalayim and settled in Modein. 2 He had five sons, Yochanan surnamed Gaddi, 3 Shimon called Thassi, 4 Yehudah called Maccabi [hammer], 5 Eleazar called Avaran, and Yonatan called Apphus. 6 He saw the blasphemies being committed in Judea and Yerushalayim, 7 and said,

The Early Victories of Yehudah

3 Then his son Yehudah, who was called Maccabi, took command in his place. 2 All his brothers and all who had joined his father helped him; they gladly fought for Israel.

3 He extended the glory of his people.
Like a giant he put on his breastplate;
he bound on his armor of war and waged battles,
protecting the camp by his sword.
4 He was like a lion in his deeds,
like a lion's cub roaring for prey.

The Battle at Emmaus

4 Now Gorgias took five thousand infantry and one thousand picked cavalry, and this division moved out by night 2 to fall upon the camp of the Jews and attack them suddenly. Men from the citadel were his guides. 3 But Yehudah heard of it, and he and his warriors moved out to attack the king's force in Emmaus 4 while the division was still absent from the camp. 5 When Gorgias entered the camp of Yehudah by night, he found no one there, so he looked for them in the hills, because he said, "These men are running away from us."

5 When the goyim all around heard that the altar had been rebuilt and the sanctuary dedicated as it was before, they became very angry, 2 and they determined to destroy the descendants of Jacob who lived among them. So they began to kill and destroy among the people. 3 But Yehudah made war on the descendants of Esau in Idumea, at Akrabattene, because they kept lying in wait for Isra'el. He dealt them a heavy blow and humbled them and despoiled them. 4 He also remembered the wickedness of the sons of Baean, who were a trap and a snare to the people and ambushed them on the highways. 5 They were shut up by him in their towers; and he encamped against them, vowed their complete destruction, and burned with fire their towers and all who were in them. 6 Then he crossed over to attack the Ammonites, where he found a strong band and many people, with Timothy as their leader. 7 He engaged in many battles with them, and they were crushed before him; he struck them down. 8 He also took Yazer and its villages; then he returned to Judea.