In the last section, we examined Scripture and found that it did not have much to tell us explicitly about tzitzit.  Like most of the commandments, the "how" of tzitzit is almost entirely tradition.  It is tradition informed by Scripture, true, but tradition nonetheless.  The details provided below are traditions unless otherwise noted.

HOW should tzitzit be worn?

The commandment in Deuteronomy indicates tzitzit should be affixed to garments "with four corners".  Since most attire does not have four corners, a special, square "prayer cloak" was devised to which the tzitzit could be affixed.  This is the tallit gadol (the big tallit).  Another, smaller garment was also devised called the tallit katan (the little tallit).  The Hebrew word tallit comes from a root verb (talal) which means "to cover".

Mantle with fringes (ẓiẓit) at the four corners; a prayer-shawl worn over the garments, and used by men after marriage and, in modern times, by boys after their confirmation as "bar miẓwot." The ṭallit, which can be spread out like a sheet, is woven of wool or silk, in white, with black or blue stripes at the ends. The silk ones vary in size, for men, from about 36 × 54 inches to 72 × 96 inches. The woolen ṭallit is proportionately larger (sometimes reaching to the ankle) and is made of two lengths sewed together, the stitching being covered with a narrow silk ribbon. A ribbon, or, for the wealthy, a band artistically woven with silver or gold threads (called "spania"), with the ends hanging, and about 24 inches long by from 2 to 6 inches wide, is sewed on the top of the ṭallit. From the four corners of the ṭallit hang ẓiẓit, in compliance with the Mosaic law (Num. xv. 38 et seq.; see Ẓiẓit). The woolen ṭallit is preferred by the pious, especially if made of coarse and half-bleached lamb's wool from the Holy Land, when it is known as a "Turkish ṭallit." Woolen ṭallits are made in Russia also, but are finer spun and almost pure white.1 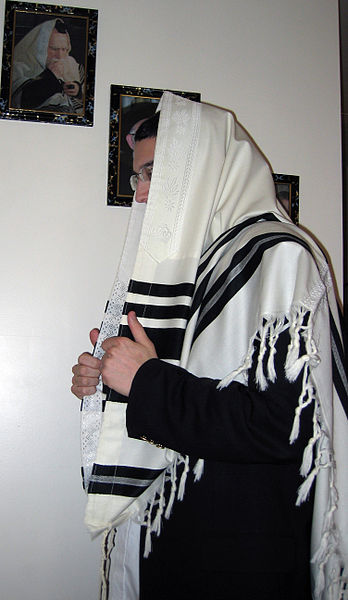 The tallit gadol (tah LEET gah DOHL) is a four-cornered garment that was created as a cloak to cover the entire upper body.  The tzitzit are affixed to the "extremities" (the corners) of this cloak.  Today it is generally worn only during times of prayer; however, in the days of Yeshua, it was common to carry this cloak throughout the day rolled up on one's shoulders.  It was likely this type of cloak that the woman with the issue of blood reached out to touch.  (Matthew 9:18-22)  Tallit gadol means "a big covering".

The second way the commandment is observed is by wearing a smaller, poncho-like garment that has four corners to which the tzitzit are affixed. This garment is often worn under one's clothing and is called a tallit katan (tah LEET kah TAHN)- a little covering.

It has been suggested that this smaller garment was devised during periods of persecution for the Jews.  It allowed the wearer to observe the commandment while wearing the smaller tallit under outer garments thus hiding the person's Jewish identity.  This seems unlikely given the ease with which the garment could be untucked revealing the tzitzit.

WHEN should tzitzit be worn?

This question of "when" has three aspects:

The commandment to wear tzitzit carries with it this purpose: to look at and remember all the commandments of the LORD.

Since they are worn to be seen then they should be worn during the day when they can be seen.  Wearing them in the dark does not serve the purpose for which they are commanded.

There are no days specifically mentioned in Scripture when tzitzit should not be worn and the tallit is generally worn daily.

Scripture is once again silent regarding the frequency with which the tzitzit should be worn.

Generally speaking, the tallit gadol is only worn during morning prayers but not during afternoon prayers.

The tallit katan is usually worn from morning until evening.

This question recently came up in conversation in my community.  The question was actually posed whether or not an infant should have tzitzit on their onesie!

Traditions vary throughout history and geography.  Some hold that young men should wear tallit beginning with their bar mitzvah (a "coming of age" ceremony in which a 13-year-old becomes a bar mitzvah [a "son of the commandments"]).  Others hold that men should begin wearing a tallit once they are married.  The logic here is that the commandment says "so that you will not go astray after your heart and your eyes".

WHO should wear tzitzit?

The commandment literally says benei Yisrael which can be either "sons" (literally) or "children" (figuratively) of Israel.

Although they were permitted to wear a tallit well into the 18th century, a gradual movement towards prohibition arose and today women are not allowed to wear a tallit in Orthodox Judaism. Conservative and Reform Judaism have, to varying degrees, allowed women to wear tallits.

WHERE should tzitzit be worn?

The "where" question applies in two ways: where on the garment and in what physical locations can it be worn?

The Numbers 15 commandment regarding tzitzit indicates that they should be worn so that we will be holy to our G-d.  Tzitzit then are garments of holiness.  Traditionally, the tallit gadol (which can easily be removed) is not taken into places where human or animal refuse is present.  The tallit katan (which cannot easily be removed) is allowed into such places but the tzitzit must be treated with caution so that they do not come into contact with dung or refuse.

HOW should tzitzit be made?

This question has a whole host of related questions:

What qualifies as "tassels"?

Traditionally, tzitzit is made from high-quality twisted linen twine that is bleached white.

How long, high, or wide should they be?

The individual strands are about a yard (a meter) long to allow them to be folded in half through the corners of the tallit and then knotted and wrapped.  The diameter of the strands varies according to tradition.  Ashkenazic (Eastern-European) strands are thinner than Sephardic (Southwestern-Europe/North Africa).

What shape should they have?

The strands themselves are round but they are wrapped and knotted into various shapes depending on the specific tradition that is used to attach the tzitzit to the tallit.

From WHAT should tzitzit be made?

Tzitzit are generally made from twined linen that is bleached white.

The tallit gadol is generally made from wool (sometimes cotton) that has various colors and patterns woven into the fabric.

The tallit katan is generally made from knit cotton or synthetic materials.

The "blue" mentioned in the commandment is not the generic Hebrew word for the color blue. It is a specific material called techelet (teh KHEL et). At some point in the past, the exact source of techelet was lost and so many Orthodox communities today wear plain white tzitzit without the "thread of blue".  Although the Talmud describes the source as an animal called a "chilazon" the exact type of animal is unknown.

The thread of techelet included with the tzitzit should be made from the appropriate source.  Some groups have chosen one or the other of the animals noted above while mainstream Orthodoxy remains undecided.

By WHOM should tzitzit be made?

The threads themselves can be made by any skilled individual.

The attachment and wrapping/knotting of tzitzit are sometimes performed by a man's wife since the purpose of the tzitzit is to keep him from "going astray after his heart and his eyes".  It is considered by some to be a wife's duty to wrap tzitzit for her husband to help keep him faithful.

Given how it is made and the material from which it is made, how should it be washed?

Since most tallit gadol are made from wool, washing them in a sink using cool water and Woolite (or similar gentle cleaner) works.  Drying them on a line or just hanging over a bathtub is recommended rather than risking damage in a dryer.  This works for tallit katans as well.

Should the tassels be cut at any time or not?
If they can (or should) be cut, with what should they be cut?

Generally speaking, the tzitzit threads are not cut except during original production.