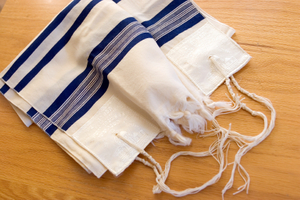 Tzitzit is one of the most visible expressions of Torah observance within Jewish and Messianic communities.  The details of this mitzvah are often the topic of debate and discussion among Messianic believers.

When we are encouraged by others in our congregations to do something or to believe something in regards to Scripture, we should always be like the Bereans and test everything against Scripture itself (Acts 17:11)... the whole of Scripture (2 Timothy 3:16-17).  If a person feels "led by the spirit" to speak, behave, or believe a certain way, they should test that spirit (1 John 4:1) and see if what that spirit says is in agreement with Scripture.

Let's walk together through Scripture and see what it says about the matter of tzitzit.  As we do, may we say, believe, and do what is right, be merciful in our speech and actions, and walk humbly with the Lord (Micah 6:8).

The Hebrew word ציצת (tzitzit- Strong's #6734) is found only four times in three verses of the Tanakh.

The first, second, and third use of tzitzit are found in Numbers 15 where a commandment is given to the sons of Israel:

The LORD also spoke to Moses, saying, "Speak to the sons of Israel, and tell them that they shall make for themselves tassels on the corners of their garments throughout their generations, and that they shall put on the tassel of each corner a cord of blue.  It shall be a tassel for you to look at and remember all the commandments of the LORD, so as to do them and not follow after your own heart and your own eyes, after which you played the harlot, so that you may remember to do all My commandments and be holy to your God.  I am the LORD your God who brought you out from the land of Egypt to be your God; I am the LORD your God." (Numbers 15:37-41)

The last use of tzitzit is found in the writings of the prophet Ezekiel:

He [G-d] stretched out the form of a hand and caught me by a lock of my head; and the Spirit lifted me up between earth and heaven and brought me in the visions of God to Jerusalem, to the entrance of the north gate of the inner court, where the seat of the idol of jealousy, which provokes to jealousy, was located. (Ezekiel 8:3)

The prophet describes being picked up by tzitzitot roshei.  The "head tzitzit" [plural]?  This is not clear but may be the source for the traditional peyot [hair curls worn on the temple of head].

The Septuagint translates the Hebrew word tzitzit into the Greek word κράσπεδον (kraspedon- Strong's #2899).  This word is found in two other verses of the Septuagint in addition to the three places noted above.

You shall make yourself tassels on the four corners of your garment with which you cover yourself. (Deuteronomy 22:12)

This verse does not contain the Hebrew word tzitzit.  It uses a different word that is translated into kraspedon: גדל (gedil- Strong's #1434) which means "twisted threads".

The last instance of kraspedon in the Septuagint is from the prophet Zechariah:

"Thus says the LORD of hosts, 'In those days ten men from all the nations will grasp the garment of a Jew, saying, "Let us go with you, for we have heard that God is with you."'" (Zechariah 8:23)

This verse uses yet another word: כנף (kanaph- Strong's #3671) which means "a wing or an extremity".  We will examine this word in more detail a bit later.

In the Septuagint, the Hebrew word tzitzit is translated into the Greek word kraspedon.  We find this word used five times in the Greek Scriptures, the writings of the apostles.

While He was saying these things to them, a synagogue official came and bowed down before Him, and said, "My daughter has just died; but come and lay Your hand on her, and she will live."

Jesus got up and began to follow him, and so did His disciples.  And a woman who had been suffering from a hemorrhage for twelve years, came up behind Him and touched the fringe of His cloak; for she was saying to herself, "If I only touch His garment, I will get well."  But Jesus turning and seeing her said, "Daughter, take courage; your faith has made you well." At once the woman was made well. (Matthew 9:18-22)

In this passage, we find that Yeshua was wearing kraspedon... tzitzit.  The woman with the issue of blood touch the tzitzit and her faith made her well.  We find a parallel to this passage in the writings of Luke:

And a woman who had a hemorrhage for twelve years, and could not be healed by anyone, came up behind Him and touched the fringe of His cloak, and immediately her hemorrhage stopped. (Luke 8:43-44)

The next verse where we find kraspedon used is shortly after Messiah walks on water and calls Peter out to him.  They both get back into the boat and dock at Gennesaret.

And when the men of that place recognized Him, they sent word into all that surrounding district and brought to Him all who were sick;  and they implored Him that they might just touch the fringe of His cloak; and as many as touched it were cured. (Matthew 14:35-36)

When the sick of Gennesaret touch the tzitzit of Messiah's cloak, they were cured.  We find a parallel passage in the writings of Mark:

Wherever He entered villages, or cities, or countryside, they were laying the sick in the market places, and imploring Him that they might just touch the fringe of His cloak; and as many as touched it were being cured. (Mark 6:56)

The last time we find kraspedon in the writings of Matthew is in chapter 23.

Then Jesus spoke to the crowds and to His disciples, saying: "The scribes and the Pharisees have seated themselves in the chair of Moses; therefore all that they tell you, do and observe, but do not do according to their deeds; for they say things and do not do them.  They tie up heavy burdens and lay them on men's shoulders, but they themselves are unwilling to move them with so much as a finger.  But they do all their deeds to be noticed by men; for they broaden their phylacteries and lengthen the tassels of their garments. (Matthew 23:1-5)

In this passage, Messiah condemns the hypocrisy of the scribes and Pharisees.  They broaden their phylacteries and lengthen their tzitzit in order to be noticed by men.  He does not condemn their use of these items... only their hypocrisy in the way in which they use them.  Indeed, later in the chapter, He goes on to say:

For you tithe mint and dill and cummin, and have neglected the weightier provisions of the law: justice and mercy and faithfulness; but these are the things you should have done without neglecting the others. (Matthew 23:23) [emphasis added]

These are the five instances that kraspedon are found in the writings of the apostles.

Next, let's examine the commandment of tzitzit in more detail...