When did Yeshua give this command?

Matthew 28 records this command of the Master after His death, burial, and resurrection but before His ascension. It is at this point that many claim Yeshua "fulfilled" (in their minds "performed them fully, so we don't have to obey") the commandments.  If ever there was ever a time when Messiah could have made the statement "the Law no longer applies" this would have been it.  Instead, He tells his disciples to go out and teach others to obey the Law.

Where did this occur?

But the eleven disciples proceeded to Galilee, to the mountain which Jesus had designated. (Matthew 28:16)

The Galilee (shown in the image at right below) is a region of the Land of Israel (at left below). 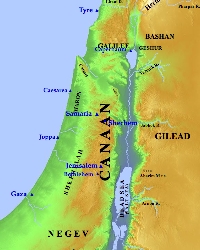 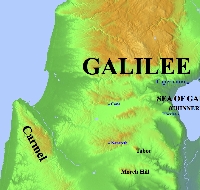 Although there are several landmarks recognizable by their names (Mt. Tabor, Moreh, Carmel, etc.), Scripture does not give us the name of a particular location other than "the mountain which Jesus had designated".

The mountain could have been any of several peaks in the broad area that is the Galilee.

There are a number of reasons why this command was given at this time to these specific individuals. Much of what we could list would be speculation. Instead, let's examine the first words of the great commission:

And Jesus came up and spoke to them, saying, "All authority has been given to Me in heaven and on earth. Go therefore and make disciples of all the nations, baptizing them in the name of the Father and the Son and the Holy Spirit, teaching them to observe all that I commanded you; and lo, I am with you always, even to the end of the age." (Matthew 28:18-20)

"All authority has been given to Me in heaven and on earth."

Messiah Yeshua has stated that He has been given all authority in heaven and on earth. This absolute authority leaves no room for anyone else (e.g. Satan) to have any authority.  Anything and everything that happens in heaven and on earth occurs under the authority of Yeshua the Messiah, the Son of the Living G-d (Matthew 16:16).  At the end of time, He hands over the kingdom to G-d the Father (1 Corinthians 15:24).

It is because of this that the disciples are given the order to "go" and make disciples of all the nations.

Paul indicated that this instruction was completed in his day. As he wrote in his letter to the Romans:

Now to Him who is able to establish you according to my gospel and the preaching of Jesus Christ, according to the revelation of the mystery which has been kept secret for long ages past, but now is manifested, and by the Scriptures of the prophets, according to the commandment of the eternal God, has been made known [past tense] to all the nations, leading to obedience of faith; to the only wise God, through Jesus Christ, be the glory forever. Amen. (Romans 16:25-27)

So, too, may we seek that it be completed in our day as well.