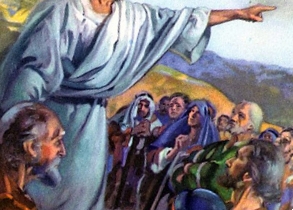 What did Yeshua tell them? Did He tell them to go out and convert unbelieving Jews and Gentiles into Christians?

He gave them three specific instructions:

A disciple is a person who chooses to live his life just like his rabbi.

Although believers have only One who is our Rabbi (the Lord Yeshua), all of the rabbis in the history of the world have followed the same pattern of discipleship: learn Scripture and walk in obedience to G-d's Word according to the manner that the rabbi does.

A disciple is a person who chooses to live his life just like his rabbi. We are to be conformed to the image of G-d's own Son (Romans 8:29) and live our lives just like our Rabbi.

Does this mean that we need to be crucified by Roman soldiers at the behest of Temple authorities? By no means! Messiah, Himself stated

It is enough for us to become like our Teacher and our Master.

The instruction that Yeshua gave to the eleven disciples was this: teach others to live their lives as He lived His life. Nobody can be converted to such a thing because this call to discipleship is not for everyone. As it is written, "For many are called, but few are chosen" (Matthew 22:14) and "it does not depend on the man who wills or the man who runs, but on G-d who has mercy" (Romans 9:16). It is the same for believers today as it was Yeshua's disciples:

You did not choose Me but I chose you, and appointed you that you would go and bear fruit, and that your fruit would remain, so that whatever you ask of the Father in My name He may give to you. (John 15:16)

Again we should consider that this is the Jewish Messiah and His Jewish disciples. What is He telling them in this command?

Our English word "baptize" comes from the Greek word used in the Apostolic Writings: βαπτίζω [baptizo, Strong's #907].  Baptizo originates in the root βαπτω [bapto, Strong's #911].  Here is what Strong's Greek Dictionary has to say:

A primary verb; to whelm, that is, cover wholly with a fluid; in the New Testament only in a qualified or specific sense, that is, (literally) to moisten (a part of one’s person), or (by implication) to stain (as with dye): - dip. 1 [emphasis added]

This perspective would explain why Yochanan [John] was baptizing in the Yarden [Jordan] river: he needed a source of water large enough to enable him to immerse a person completely.  If he was simply sprinkling the person, then he could have done this any place where he could find a cup of water.

Is Baptism Something New?

Was the concept of baptism something new to the time of Yeshua?

Submerging in a pool of water for the purpose not of using the water's physical cleansing properties but expressly to symbolize a change-of-soul is a statement at once deeply spiritual and immensely compelling. No other symbolic act can so totally embrace a person as being submerged in water, which must touch and cover every lesion, every strand of hair, every birthmark. No other religious act is so freighted with meaning as this one which touches every aspect of life and proclaims a total commitment to a new idea and a new way of life as it swallows up the old and gives birth to the new.2 [emphasis added]

Therefore if anyone is in Christ, he is a new creature; the old things passed away; behold, new things have come. (2 Corinthians 5:17)

Could it be that Messiah gave us a greater understanding of the well-known ritual of tevillah (and its symbolism of being reborn) and established it as the sign of the new covenant by which we have new life in Him?

Is Baptism Only Found in the Apostolic Writings?

While the word "baptism" is not found in the Tanakh, the Greek words baptizo and bapto are found in the Septuagint.

The story of Elisha and Naaman in 2 Kings chapter 5 contains the Greek baptizo.  Naaman was the captain of the army of the king of Aram.  Naaman had leprosy [Hebrew: tzara'at] and heard about the prophet Elisha in Israel. Naaman went to the house of Elisha in Israel:

So Naaman came with his horses and his chariots and stood at the doorway of the house of Elisha. Elisha sent a messenger to him, saying, "Go and wash in the Jordan seven times, and your flesh will be restored to you and you will be clean." But Naaman was furious and went away and said, "Behold, I thought, 'He will surely come out to me and stand and call on the name of the LORD his God, and wave his hand over the place and cure the leper.' "Are not Abanah and Pharpar, the rivers of Damascus, better than all the waters of Israel? Could I not wash in them and be clean?" So he turned and went away in a rage. Then his servants came near and spoke to him and said, "My father, had the prophet told you to do some great thing, would you not have done it? How much more then, when he says to you, 'Wash, and be clean'?" So he went down and dipped himself seven times in the Jordan, according to the word of the man of God; and his flesh was restored like the flesh of a little child and he was clean. (2 Kings 5:9-14)

The Greek word translated as "dipped" (highlighted above) is the word baptizo. What makes this passage important is the other highlighted word above: "wash". The Greek word translated as "wash" is λούω [louo, Strong's #3068] which means "to wash an entire person". There are other words used to wash only a part or to wash garments. The instruction that Elisha provided was one to wash (or immerse) completely. Naaman eventually went an "dipped" (baptizo) himself seven times in the Jordan. We can see from this passage that the Tanakh references full-immersion baptism.

Here are the passages in Torah that use bapto:

"I baptized you with water; but He will baptize you with the Holy Spirit." (Mark 1:8)

Jesus answered, "Truly, truly, I say to you, unless one is born of water and the Spirit he cannot enter into the kingdom of God. (John 3:5)

But one of the soldiers pierced His side with a spear, and immediately blood and water came out. (John 19:34)

Blood, water, Spirit, baptism.  The words and imagery of the Torah link all of these together.

3. All I Commanded You

This part of the Great Commission is most often ignored or misunderstood.

What did Yeshua teach and command them?

Yeshua taught His Jewish disciples for two to three years. During that time, He taught His disciples the proper interpretation and application of the Law of Moses. That is what rabbis do and why they are called a rabbi. Rabbi translates into English as "teacher".

The word rabbi comes from a Hebrew word that means "great one".  How is a rabbi great?  In his knowledge of Torah.

Our Rabbi gave His disciples commands in regards to the full and proper interpretation of Torah (e.g. do not lust after a woman or you have committed adultery in your heart) as well as the appropriate and complete application of those commands. Please note that Yeshua never taught his disciples to disregard any portion of the Torah. If He ever had done so then He would have sinned:

None of the charges against Yeshua include teaching disobedience to the Torah.

Although Messiah directed it toward His eleven talmidim, all of us, as His disciples, should be obeying this "all that I commanded you" portion of the Great Commission.

1. Strong’s Hebrew and Greek Dictionaries. Dictionaries of Hebrew and Greek Words taken from Strong's Exhaustive Concordance by James Strong, S.T.D., LL.D., 1890. [back]
2. Mikveh: Immersing in the Ritual Pool- http://www.myjewishlearning.com/life/Life_Events/Conversion/Conversion_Process/Mikveh.shtml [back]