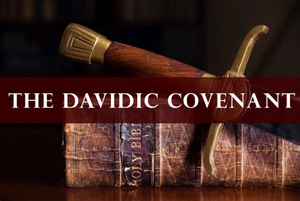 Chapter 18 of the book of 1 Samuel begins with these words:

The second Davidic covenant referenced in Scripture is the covenant David made with Avner in 2 Samuel 3:12. The details of this covenant are also not given in Scripture but it involves Avner's assistance in bringing "all Isra'el" over to David's side. Scripture tells us that David gave one condition for establishing the covenant: Avner would bring Michal, Saul's daughter and David's wife, to David (2 Samuel 3:13).

The fourth reference to a covenant spoken of in Scripture in regards to David is actually found in the words of David himself at the end of his life. It is found in 2 Samuel 23:5:

Now these are the last words of David. David the son of Jesse declares, The man who was raised on high declares, The anointed of the G-d of Jacob, And the sweet psalmist of Israel, "The Spirit of the LORD spoke by me, And His word was on my tongue. "The G-d of Israel said, The Rock of Israel spoke to me, 'He who rules over men righteously, Who rules in the fear of G-d, Is as the light of the morning when the sun rises, A morning without clouds, When the tender grass springs out of the earth, Through sunshine after rain.' "Truly is not my house so with G-d? For He has made an everlasting covenant with me, Ordered in all things, and secured; For all my salvation and all my desire, Will He not indeed make it grow?

Here is the first passage using brit and David in the same context that references what is commonly identified as "the Davidic covenant".

We are not given any details regarding the covenant in this particular passage. Where is this covenant given and what are its details? Traditionally we find them in 2 Samuel 7:5-16 and the words that G-d gave to Natan the prophet to speak to David:

"Go and say to My servant David, 'Thus says the LORD, "Are you the one who should build Me a house to dwell in? For I have not dwelt in a house since the day I brought up the sons of Israel from Egypt, even to this day; but I have been moving about in a tent, even in a tabernacle. Wherever I have gone with all the sons of Israel, did I speak a word with one of the tribes of Israel, which I commanded to shepherd My people Israel, saying, 'Why have you not built Me a house of cedar?'"'

Now therefore, thus you shall say to My servant David, 'Thus says the LORD of hosts, "I took you from the pasture, from following the sheep, to be ruler over My people Israel. I have been with you wherever you have gone and have cut off all your enemies from before you; and I will make you a great name, like the names of the great men who are on the earth. I will also appoint a place for My people Israel and will plant them, that they may live in their own place and not be disturbed again, nor will the wicked afflict them any more as formerly, even from the day that I commanded judges to be over My people Israel; and I will give you rest from all your enemies.

The LORD also declares to you that the LORD will make a house for you. When your days are complete and you lie down with your fathers, I will raise up your descendant after you, who will come forth from you, and I will establish his kingdom. He shall build a house for My name, and I will establish the throne of his kingdom forever. I will be a father to him and he will be a son to Me; when he commits iniquity, I will correct him with the rod of men and the strokes of the sons of men, but My lovingkindness shall not depart from him, as I took it away from Saul, whom I removed from before you. Your house and your kingdom shall endure before Me forever; your throne shall be established forever."'"

This passage has a parallel in 1 Chronicles 17:7-14. Solomon also references this in 2 Chronicles 6:16 as that which G-d "promised" [gave His Word] to David. Let's examine the details of this covenant:

The Covenant Belongs to G-d

Previously in this series we noted that the ownership of and authority in His covenants is G-d's alone. Only He has authority to initiate a covenant and can bring something of value to the covenant. We have nothing to offer Him except that which already his.

A Covenant of Grace

Many of the promises in this covenant point to Messiah because of their eternal nature. The declaration G-d makes in 2 Samuel 7:14 that G-d will be a father to this descendant [a singular rather than plural noun] and the descendant will be a son to G-d is clearly echoed in Matthew 3:17, Matthew 7:21 and numerous other passages in the Apostolic Writings. These testify to the Father-Son relationship between Messiah Yeshua and our Heavenly Father.

A Covenant of Unconditional Blessing

The passages noted above in the "Benefits" section of the covenant show that this is a covenant of blessing to David and his descenant forever. It is the covenant of G-d's promise of the rulership of G-d's eternal kingdom to David's heir: Messiah Yeshua.

G-d's promises and covenant with David are unconditional.

The parallel passages in 2 Chronicles regarding G-d's covenant with David record it as a "covenant of salt" 2 Chronicles 13:5. This is symbolic language for an "eternal" covenant.

We see G-d speaking to David through the prophet Natan.

G-d's promise/covenant that was given to David.

The exact date is not given in Scripture but it is noted that this came about "when the king [David] lived in his house, and the LORD had given him rest on every side from all his enemies..." 2 Samuel 7:1. From this we know that the events occurred after the battles spoken of earlier in the books of 1 and 2 Samuel.

Eliezer Shulman in his book "The Sequence of Events in the Old Testament" provides a Scripturally-based chronology that originates with the Creation. His research places the date when David brings the Ark of the Covenant up from Kiriat-Yearim to the City of David in the year 2891 from Creation1. This is about 1200 years after the Flood and around 400 years after the Isra'elites first entered the Land after wandering in the wilderness for 40 years. It is likely during the time after the Ark is brought into the City of David that the covenant is given.

The location where the covenant was given is not specifically given in Scripture although the point that David was living in "his house" (likely referring to the cedar house David built for himself in the City of David) might be an indication of where Natan delivered G-d's covenant message. The fulfillment of the kingdom promise is in the Land of Isra'el.

The impetus behind G-d's covenant with David seems to be David's statement in 2 Samuel 7:2. David observes that he lives in a cedar house but G-d dwells in a tent. This seems inequitable to David who sets his mind to build a house for G-d.

G-d's response to David through Natan the prophet seems to express G-d's correction of David's thoughts. In 2 Samuel 7:6-7 G-d points out that He has never asked for such a thing (for someone to build Him a house) but has dwelt in a "tent, even in a tabernacle". This still does not address why G-d gave such a promise/covenant with David.

No explicit reason is expressly stated in Scripture as to "why" G-d made this covenant with David. David, however, gives voice to one possible purpose in 2 Samuel 7:25-26 where he states "that Your name may be magnified forever..." referring to G-d's Name.

Following this covenant are numerous references to the preceding covenants, the "ark of the covenant", and various minor covenants made between men. The next covenant mentioned of any significance is the covenant Josiah made with G-d (2 Kings 23:3). The latter portion of the verse tells us that all the people of Isra'el entered into the covenant.

2 Chronicles 21:5-7 records that, although King Yehoram did evil in the sight of the G-d, He did not destroy the house of David because of the covenant He had made with him.

Ezra 10:3 tells us that, in the time of Ezra, Shecaniah called the men of Isra'el to make a covenant with G-d to put away their foreign wives and their children.

The next major covenant of Scripture mentioned is the New Covenant declared in Jeremiah 31:31-34. [coming soon]