Let us take a journey together through Scripture and see what it says about the matter of cities of refuge... a "walk in the Word" so to speak. As we take this walk, may we say, believe, and do what is right, be merciful in our speech and actions, and walk humbly with the Lord (Micah 6:8).

In Numbers 35 G-d commands Moshe to set aside 48 cities for the Levi'im. Among these cities are to be "cities of refuge" to which someone in Israel can flee if they accidentally kill another person. Scripture goes on to record the specific cities which were selected.

In Joshua 20 G-d speaks to Y'hoshua and reminds him to designate cities of refuge as spoken to Moshe above. The entire chapter is dedicated to recording the cities that were set aside. In the remainder of this article we will list out the cities, note every place where they are mentioned in Scripture and provide a map of their locations.

The 20th chapter of Y'hoshua closes with this:

These were the appointed cities for all the sons of Israel and for the stranger who sojourns among them, that whoever kills any person unintentionally may flee there, and not die by the hand of the avenger of blood until he stands before the congregation.

Joshua 20:7 lists Kedesh in the Galil [Galilee] as the first city of refuge. It is in the hill country of Naphtali. The Hebrew word קדשׁ (qedesh- Strong's #6943) means "sanctuary" in the sense of being a holy set apart location. This Hebrew word comes from the word קדשׁ (qodesh- Strong's #6944) which simply means "sacred" or "set apart". These words are closely related to the word describing G-d in Isaiah 6:3 where He is described as "Holy, Holy, Holy"... קדוֹשׁ (qadosh- Strong's #6918).

Kedesh is first mentioned in Joshua 12:22 in referring to the king of Kedesh that the Israelites defeated. The next time Kedesh is mentioned outside of Y'hoshua is in Judges 4 where the prophetess Devorah sends for Barak to send him out against Sisra:

Now she sent and summoned Barak the son of Abinoam from Kedesh-Naphtali, and said to him, "Behold, the LORD, the G-d of Israel, has commanded, 'Go and march to Mount Tabor, and take with you ten thousand men from the sons of Naphtali and from the sons of Zebulun.

Barak was from Kedesh, the city of refuge in the tribal area of Naphtali.

Judges 4:9 records that Devorah went with Barak back to Kedesh. Verse 10 records that Barak called the tribes of Zevulun and Naphtali to Kedesh to build an army of ten thousand men. Verse 11 records that Chever the Keini lived near Kedesh and reported to Sisra that Barak had left with ten thousand men to go to Mt. Tabor which is to the south and east of Kedesh [click on map at right for a larger view].

When Sisra mounts an attack [likely on Kadesh] Barak returns and defeats the invading army. Sisra's army is destroyed and he, himself, is killed by woman named Ya'el when she drives a peg through his temple (Judges 4:22).

In the days of Pekah king of Israel, Tiglath-pileser king of Assyria came and captured Ijon and Abel-beth-maacah and Janoah and Kedesh and Hazor and Gilead and Galilee, all the land of Naphtali; and he carried them captive to Assyria.

The last references to Kedesh in the Tanakh are found in 1 Chronicles chapter 6. The English books of First and Second Chronicles are a single book in the Hebrew Bible called Divrei Hayyamim, (i.e. "matters [of] the days") based on the phrase sefer divrei ha-yamim le-malkhei Yehudah ("book of the days of the kings of Judah"), which appears several times in the Books of Kings.

In the time of King David there appear to be two cities known as Kedesh. The latter reference above is "Kedesh in Galilee" but is not greatly informative since the northern-most city named Kedesh is in the northern part of the area known as Galilee and the southern-most of the two is very near the Sea of Galilee. The southern-most city of Kedesh is physically closer to the traditional tribal area of Issachar but still shows in many maps as being within the area of Naphtali.

There is also a separate unrelated location known as Kedesh-Barnea which is in the south of the province of Judah (see Google map here).

Kedesh is not mentioned by name in the Greek Scriptures although it is possible that, given His frequency of travel throughout the Galil, Yeshua may have visited there.

Joshua 20:7 lists the next city of refuge as Shechem in the hill country of Ephrayim. שׁכם (shechem- Strong's #7927) means "ridge" or "shoulder" as in the shoulder of a mountain.

Shechem is not mentioned again until the book of Y'hoshua (Joshua):

1 Kings 12:25 indicates that Jeroboam built Shechem in the hill country of Ephrayim and lived there. Had it been destroyed requiring it to be rebuilt or was Jeroboam building a new town with the same name in another part of the Land?

1 Chronicles 6:67 recounts the giving of Shechem [in the hill country of Ephrayim] as a city of refuge.

1 Chronicles 7:28 describes Shechem as an area having "towns" [plural] that belonged to the descendants of Y'hoshua the son of Nun.

Psalms mention Shechem twice. Both Psalm 60:6 and Psalm 108:7 state that G-d has spoken in His holiness and says He will "portion out Shechem and measure out the valley of Succoth".

COMMENTARY DISCLAIMER: The author's opinion regarding these Psalm references to Shechem is that these passages can be seen figuratively as G-d giving everyone (Jew and Gentile believers alike) a "portion" in Shechem (a place of refuge) and a "measure" in Succoth (a place of abiding in His presence... as pictured in the moed of Sukkot).

Joshua 20:7 goes on to list the third city of refuge as Kiryat-Arba [also known as Hevron] in the hill country of Y'hudah. The Hebrew name קרית ארבּע (Kiryat arba Strong's #7153) is actually two words:

The first word, קריה (kiriah- Strong's #7151), which means city or town. קרית (kiriat) means "city of" or "town of". The first time this word is used in Scripture is to refer to the "town of Sichon" in a proverb that is given in Numbers 21:28.

The second word, ארבּע (arba- Strong's #702), which means "four". The first time this word is used is in Genesis 2:10 when Scripture describes the river that flowed out of the Garden of Eden and divided and became four rivers.

The city of four what is not noted although Joshua chapter 14 sheds some light on the matter:

Now the name of Hebron was formerly Kiryath-arba; for Arba was the greatest man among the Anakim. Then the land had rest from war.

According to the rabbinical commentator Rashi, Kiryat Arba ("Town of Arba") means either the town (kirya) of Arba himself, the giant who had three sons, or is referring to four giants: Arba and his three sons, Ahiman, Sheshai, and Talmi who are described as being the sons of a "giant" in Numbers 13:22. ("On the way through the Negev, they (Joshua and Caleb) came to Hebron where [they saw] Ahiman, Sheshai and Talmi, descendants of the Giant [ha-anak]...") This matches the teaching of the Targum and Saadia Gaon.  Others say that Anak is a proper name (Targum Jonathan and the Septuagint) and that he, Anak, may have been the father of the three others mentioned in the Book of Numbers as living in Hebron (which the Book of Joshua says was previously called Kiryat Arba).

There are nine references to Kiryat-arba in Scripture:

Hevron is חברון (chevron) in Hebrew and means "association or league". Hevron comes from a root word (chavar- Strong's #2266) that means "to unite" or "to be joined" as in a marriage or in an alliance. Hevron is Strong's #2275 and is mentioned 59 times in the Tanakh (including 8 of the 9 above) in reference to the city. Hevron is also used nine times to refer to a son of Kohat and a son of Mareshah who also named Hevron (e.g. Exodus 6:18).

Hevron/Kiryat-arba is not explicitly mentioned in the Apostolic Writings.

Joshua 20:8 first lists Bezer on the plain from the tribe of Reuven among the cities of refuge that are on the east side of the Yarden.

The word Bezer בּצר (betzer- Strong's # 1221) means "fortress" and is only mentioned 5 times in the Tanakh:

Bezer is not mentioned in the Apostolic Writings.

Joshua 20:8 next names Ramot Gil'ad from the tribe of Gad as the second of the cities of refuge on the east side of the Yarden.

Ramot is the referenced 5 times in the Tanakh:

Neither Ramot nor Gil'ad are explicitly mentioned in the Apostolic Writings.

Joshua 20:8 concludes the cities with Golan in Bashan from the tribe of M'nasheh.

Although Golan is referenced quite a bit in recent news and recent events it is only referred to 4 times in the Tanakh:

Neither Golan nor Bashan are directly mentioned in the Apostolic Writings, however some events that occurred in the area of Golan are recorded in Scripture:

Banias (the Arabic pronunciation of Panias) is an archaeological site and former city located at the foot of Mt. Hermon in the Golan Heights. The site is 150Km north of Yerushalayim and 60Km southwest from Damascus. The city was also called Caesarea Philippi by the Romans.1 Caesarea Philippi is mentioned twice in the writings of the apostles in the parallel passages of Matthew 16:13 and Mark 8:27. 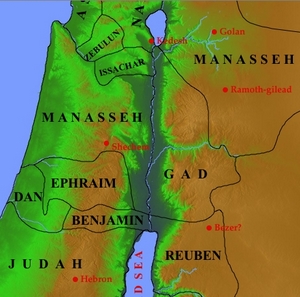 There are six cities of refuge listed in Scripture:

Although all are listed several times in the Tanakh, none of them are directly referenced in the Apostolic Writings. The image at right shows all the cities in a single map.