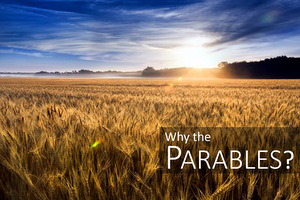 During His ministry in the first century, Yeshua frequently delivered His message using parables.

All these things Jesus spoke to the crowds in parables, and He did not speak to them without a parable. This was to fulfill what was spoken through the prophet: "I WILL OPEN MY MOUTH IN PARABLES; I WILL UTTER THINGS HIDDEN SINCE THE FOUNDATION OF THE WORLD."  (Matthew 13:34-35)

There are about 30 parables recorded in the gospel accounts of Matthew, Mark, Luke, and John.  You may have heard that Yeshua taught in parables for the purpose of hiding the true meaning of His message from unbelievers and those who opposed Him.  This is not true for at least two reasons.

First, Matthew 13:35 tells us that Messiah spoke in parables to reveal knowledge and "utter things hidden since the foundation of the world."  Here Matthew quotes Psalm 78 verse 2, "I will open my mouth in a parable; I will utter dark sayings of old..."  Here is the full context of that verse structured in the poetic form in which it was originally written:

Listen, O my people, to my instruction;
Incline your ears to the words of my mouth.
I will open my mouth in a parable;
I will utter dark [hidden] sayings of old, which we have heard and known,
And our fathers have told us.
We will not conceal them from their children,
But tell to the generation to come the praises of the LORD,
And His strength and His wondrous works that He has done.
For He established a testimony in Jacob
And appointed a law in Israel,
Which He commanded our fathers
That they should teach them to their children,
That the generation to come might know, even the children yet to be born,
That they may arise and tell them to their children,
That they should put their confidence in God
And not forget the works of God,
But keep His commandments,
And not be like their fathers,
A stubborn and rebellious generation,
A generation that did not prepare its heart
And whose spirit was not faithful to God.

Psalm 78 was written by Asaph, a worship leader in the Temple (1 Chronicles 6:39) and a "seer" or a prophet (2 Chronicles 29:30).  Asaph is "the prophet" mentioned in Matthew 13:35 and he tells us something very interesting: Israel has heard these hidden sayings of old..."our fathers have told us"!

What are these sayings?

Asaph says that they are the testimony and the law (verse 5) which "the fathers" (i.e. Abraham, Isaac, Jacob) were commanded to teach their children.  These two things are echoed in the book of Revelation: the dragon makes war with the children of Israel who keep the commandments (law) of G-d and hold to the testimony of Yeshua (Revelation 12:17).  [A quick side note: check out the name of the book.  Revelation means something revealed not something hidden. :) ]

The parables of Scripture aren't about hiding knowledge but about reminding each generation "that they should put their confidence in G-d and not forget the works of G-d, but keep His commandments", and not be like their fathers who rebelled against Him.

The second reason parables were not used to hide Messiah's message is that parables are a well-known form of Jewish literature used for teaching called משׁל (mashal).  This form of teaching pre-existed the first-century life and ministry of Christ and still exists within Judaism today.  Asaph's mention of mashal or a parable in Psalm 78 isn't the first time it is found in Scripture.  The story of Balaam in Numbers 23 and 24 uses the same word (mashal) which is translated as "discourse" in the NASB.  Mashal is used 40 times in the Tanakh including several times in the book of Ezekiel.  Parables were used to take complex ideas and distill them into a simple narrative in order to illustrate a point rather than conceal it.  Yeshua, a Jewish Rabbi, takes this Jewish form of literature and uses it to communicate His message to His first-century Jewish audience.

Why do you speak to them in parables?

And the disciples came and said to Him, "Why do You speak to them in parables?"

Jesus answered them, "To you it has been granted to know the mysteries of the kingdom of heaven, but to them it has not been granted. For whoever has, to him more shall be given, and he will have an abundance; but whoever does not have, even what he has shall be taken away from him. Therefore I speak to them in parables; because while seeing they do not see, and while hearing they do not hear, nor do they understand.

Does it sound like Yeshua is speaking in parables so that those who heard would not understand?

Nothing could be further from the truth.

In His response to the disciples' question, Messiah quotes from Isaiah chapter 6.  This passage records the events of Isaiah's commissioning as a prophet.  G-d tells Isaiah to preach a message of repentance to the people of Israel but warns him that, although they hear his words, they could not understand.  Although they see the work of G-d in his ministry, they could not perceive.

Most of the Israelites in Messiah's day had not been granted "to know the mysteries of the kingdom" because they, too, were spiritually deaf and blind.  So how do you speak to someone who is deaf or someone who is blind?  You put things in terms they can understand: sign language for the deaf or braille for the blind.  This is the reason Messiah spoke in parables: he took spiritual ideas the people could not understand and put them into simple narratives they could understand.

But He was explaining everything privately to His own disciples

With many such parables He was speaking the word to them [the people], so far as they were able to hear it; and He did not speak to them without a parable; but He was explaining everything privately to His own disciples.  (Mark 4:33-34)

Does it sound like Yeshua was speaking in parables to the people but was explaining the parables privately to His disciples?  Such a thought would also stem from misunderstanding the purpose of parables.  They aren't riddles to be decoded and deciphered.  Perhaps a simple story (a parable?) can demonstrate what was happening here.

There once was a doctor who not only healed the sick but helped healthy people maintain their health.  When speaking with his patients, he offered health tips in simple, common terms: wash your hands before you eat; exercise daily; don't eat too much.  When speaking with his medical students he explained things in more detail using complex medical terms so they could more fully comprehend his lessons.

Was the doctor trying to hide his message from his patients?  No.  He simply spoke to them in terms they could understand and explained everything in more detail privately with his medical students since they were able to comprehend and carry on such conversations.

If Yeshua was attempting to hide his message then the parables weren't particularly effective.  Consider this passage that concludes the Parable of the Vineyard from Matthew 21:

When the chief priests and the Pharisees heard His parables, they understood that He was speaking about them. When they sought to seize Him, they feared the [n]people, because they considered Him to be a prophet.  (Matthew 21:5-6)

They understood the meaning of the parable and when Jesus applied it to them they were angry.  If this parable was meant to hide Messiah's message it didn't work very well.

Messiah spoke in parables (mashal, a common Jewish form of literature) to reach His spiritually deaf and blind audience so they could begin to comprehend His message of repentance and redemption.  G-d desires that none should perish but for all to come to repentance (2 Peter 3:9).

May the prayer of our heart be that the Lord would speak to us in whatever ways are necessary for us to understand and to live as the prophet Micah spoke:

He has told you, O man, what is good; And what does the LORD require of you But to do justice, to love kindness, And to walk humbly with your God?  (Micah 6:8)