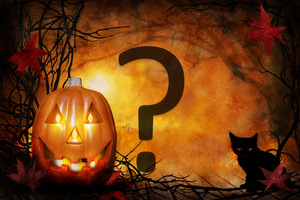 Several of our readers have asked for our thoughts and observations regarding Halloween... something along the same lines as our "Why we do not celebrate Christmas and Easter" articles.

Always willing to serve, we offer the following remarks and our top 10 reasons why we do not celebrate Halloween.

10. Halloween is a consumerist, junk-food fueled celebration of begging.

At its secular best, Halloween is an evening of costumed children going from door to door seeking sugar-laden treats from complete strangers.  Isn't taking candy from strangers what we teach our kids not to do the other 364 days of the year?

Parents are warned annually by officials to avoid any type of wholesome treats like fruit or homemade goodies because of possible tampering.

So what's left?  Packaged candy with tons of sugar, artificial colors, and other additives.

Who really gets glory on this day?  The candy companies!

Comedian Jimmy Kimmel made light of the selfishness created by Halloween in 2011 with his challenge to parents: Tell your kids that you ate all of their Halloween candy and record a video of their reaction.

Those reactions ranged from crying, sullen anger, and outrage to temper tantrums and physical outbursts towards the parents. With rare exception, the children were extremely selfish about their stash of Halloween candy.

Selfishness... it's not really funny, Jimmy.

And it's definitely not G-dly.

Before going into this item, we must note that several people have written claiming that the association of paganism with Halloween is unwarranted, ahistorical, or anachronistic.  They claim such associations are simply "conspiracy theories" and often quote various sources.  Well... they can quote their sources and we will quote ours.  You can decide for yourself.  :)

Etymology is the study of the origins and meanings of words. The word origins site, Online Etymology Dictionary, provides this definition and background for "Halloween":

Halloween c.1745, Scottish shortening of Allhallow-even "Eve of All Saints, last night of October" (1550s), the last night of the year in the old Celtic calendar, where it was Old Year's Night, a night for witches.  A pagan holiday given a cursory baptism and sent on its way1

As CBN author John Ankerberg put it, "Since Halloween itself originated in paganism, it is not surprising that its customs are related to pagan belief."

Many of the traditions of Halloween originated with the pagan celebration called "Samhain" [pronounced: sow-en].

Masks and costumes?  While masks and costumes aren't necessarily pagan, wearing them on Halloween is: http://www.cbn.com/spirituallife/onlinediscipleship/halloween/halloween_Pagan_Ankerberg.aspx

While customs continue to change and evolve, it is doubtful the holiday will ever transform so much that there will not be some remaining proof of the Druids and Celts and Halloween connection.2

Halloween candy, however, is not pagan.

That tradition actually originated as bribery used to stem vandalism.  The website "Live Science" offers this:

By the late 1800s, the tradition of playing pranks on Halloween was well established. Halloween mischief in the United States and Canada consisted of tipping over outhouses, unhinging farmer's gates, throwing eggs at houses and the like. By the 1920s and '30s, however, the celebrations had become more like a rowdy block party, and the acts of vandalism more serious.

To stem the vandalism, concerned parents and town leaders tried to ply kids with candy, encouraging trick-or-treating in costume in exchange for sweets, bumping the mischief element from the celebrations of Oct. 31 altogether. It was then that the troublemakers, neighborhood by neighborhood, adopted Oct. 30 as their day to pull pranks.3

7. Halloween is never mentioned in Scripture.

Don’t just take our word for it... search the Bible for yourself.

It is not something Scripture tells us we should include in our lives.

However, the Bible does say this:

Do not be bound together with unbelievers; for what partnership have righteousness and lawlessness, or what fellowship has light with darkness?  (2 Corinthians 6:14)

Therefore do not be partakers with them; for you were formerly darkness, but now you are Light in the Lord; walk as children of Light (for the fruit of the Light consists in all goodness and righteousness and truth), trying to learn what is pleasing to the Lord.  (Ephesians 5:7-10)

6. Halloween has no association to our Messiah.

The nighttime celebration of Halloween is focused on darkness, death, evil spirits, and other "scary" topics... none of which have anything to do with our risen Lord and Savior who is the Light of the world.

Scripture also offers us this word of warning:

This is the judgment, that the Light [that is Messiah] has come into the world, and men loved the darkness rather than the Light, for their deeds were evil.  (John 3:19)

"Be careful to listen to all these words which I command you, so that it may be well with you and your sons after you forever, for you will be doing what is good and right in the sight of the LORD your God. When the LORD your God cuts off before you the nations which you are going in to dispossess, and you dispossess them and dwell in their land, beware that you are not ensnared to follow them, after they are destroyed before you, and that you do not inquire after their gods, saying, 'How do these nations serve their gods, that I also may do likewise?' You shall not behave thus toward the LORD your God, for every abominable act which the LORD hates they have done for their gods; for they even burn their sons and daughters in the fire to their gods. Whatever I command you, you shall be careful to do; you shall not add to nor take away from it." (Deuteronomy 12:28) [emphasis added]

4. Celebrating Halloween teaches children that the occult is OK.

Some parents will dress up their children as Batman, superman, a princess, or a ballerina.  While out and about trick-or-treating, these children will likely see other children dressed up as witches and warlocks, demons and devils, ghosts and ghouls.  Most parents (not wanting to sound judgmental) will say nothing of these costumes and thus teach their children that the costumes that depict evil are just as acceptable as those that do not.

As children get older and more curious they often seek out information from their peers (or the Internet) about and dabble in various aspects of the occult.

Many children move beyond this phase of curiosity.  Many others, unfortunately, do not and become ensnared in occult practices.

What do you think should we be teaching our children?  Secular/pagan traditions or the holy ways of G-d?

The Encyclopaedia Britannica has this entry regarding Samhain:

Samhain- one of the most important and sinister calendar festivals of the Celtic year. At Samhain, held on November 1, the world of the gods was believed to be made visible to mankind, and the gods played many tricks on their mortal worshipers; it was a time fraught with danger, charged with fear, and full of supernatural episodes. Sacrifices and propitiations of every kind were thought to be vital, for without them the Celts believed they could not prevail over the perils of the season or counteract the activities of the deities. Samhain was an important precursor to Halloween.4

Paganism says there are many gods.
Scripture tells us there is only one G-d, the true G-d of Abraham, Isaac, and Jacob  (Isaiah 45:5).

Paganism says the gods play tricks on mankind.
Scripture declares that G-d is a righteous judge (Psalm 7:11) and that He loves righteousness (Psalm 11:7).

Paganism says sacrifices and propitiations are required to counteract the activities of the deities.
Scripture states that nobody can thwart G-d's purposes (Isaiah 14:27 KJV).

Wicca.com offers this about Samhain:

It is one of the two "spirit-nights" each year, the other being Beltane. It is a magical interval when the mundane laws of time and space are temporarily suspended, and the Thin Veil between the worlds is lifted. Communicating with ancestors and departed loved ones is easy at this time, for they journey through this world on their way to the Summerlands. It is a time to study the Dark Mysteries and honor the Dark Mother and the Dark Father, symbolized by the Crone and her aged Consort.5

The focus throughout Scripture is on Christ's sacrificial death, burial, and resurrection and the redemption that His work provides. By focusing on all of the unbiblical traditions associated with Halloween (ghosts, goblins, ghouls, paganism and the occult) we lose sight of Messiah. By mixing in the pagan traditions (see above) and the lies associated with them, we damage our witness as individuals and as a whole to those who are unsaved... thus further obscuring G-d's plan for humanity.

2. Halloween is a tradition of men.

Messiah spoke in very strong terms to condemn those who transgress the commandments of G-d in order to uphold the traditions of men (see Matthew 15 and our article about tradition).  Halloween (both the secular and the pagan versions) is a tradition and not commanded (or even mentioned!) anywhere in Scripture. If we celebrate Halloween and yet ignore the holy days that G-d has commanded us to honor and keep then aren't we heaping upon ourselves the same condemnation of "hypocrites!" that Christ gave in Matthew 15?

Shouldn't we instead try (as best we are able to do today) to honor those days that G-d has declared to be holy?

1. Halloween is not part of G-d's ordained pattern of worship.

"But an hour is coming, and now is, when the true worshipers will worship the Father in spirit and truth; for such people the Father seeks to be His worshipers.

Our Master tells us that we are to worship G-d in Spirit and in truth. Such are the people the Father seeks to worship Him.

Halloween is not from the Spirit of G-d.  It originated in idolatrous traditions that G-d has commanded His people not to follow.

Halloween is not filled with the truth of Scripture but with the lies of paganism.

Think about the path of moral corruption that our nation has taken while celebrating Halloween over the past century and then consider G-d's words from 2 Chronicles:

[If] My people who are called by My name humble themselves and pray and seek My face and turn from their wicked ways, then I will hear from heaven, will forgive their sin and will heal their land.

Ponder the words of the prophet Micah:

He has told you, O man, what is good; And what does the LORD require of you but to do justice, to love kindness, And to walk humbly with your God?

And finally, take to heart the words of the apostle Paul:

Rejoice always; pray without ceasing; in everything give thanks; for this is God's will for you in Christ Jesus. Do not quench the Spirit; do not despise prophetic utterances. But examine everything carefully; hold fast to that which is good; abstain from every form of evil.  (1 Thessalonians 5:16-22)