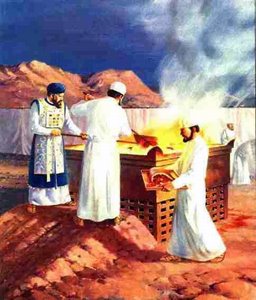 Hebrews 10:4 tells us it is impossible for the blood of bulls and goats to take away sins.  Yet those words were inspired by the very same G-d who commanded the sin offering to be made in the book of Leviticus.

So why the sacrifices?

The answer to this question takes us back to the story of the Exodus.  Here is a quick review:

Once the tabernacle was completed, Scripture tells us:

Why couldn't Moses enter the tent of meeting? He had been in and out of it for hours or days while constructing it. What was different about the tent at this point that prevented Moses from entering it?

The difference was that the physical manifestation of G-d's glory and presence was now in the holy place they had prepared for Him.

The Glory of G-d in the Tabernacle

G-d had hidden Moses in the cleft of the rock (Exodus 33:18- 34:8) and passed before him.  Moses had already been in the presence of G-d so what was different about G-d's presence in the Tabernacle?

When G-d's glory appears the "weight" of His presence brings men to their knees.

Exodus 40:34 tells us the "glory" [Hebrew: כּבוד, kavod] of G-d filled the tent of meeting.  The Hebrew word kavod comes from a root word [כּבד, kavad] that means "heavy" or "abundance".1  The weight of G-d's presence in the tent of meeting was so great that not even Moses could enter!  We often see in Scripture that when G-d's glory appears the "weight" of His presence brings men to their knees  (Isaiah 6:5, Revelation 1:17).

The Hebrew word שכינה [shekinah] comes from the root word shakan which means "to settle down, abide, or dwell".2  G-d's dwelling presence was in the midst of the Israelites in the Mishkan but nobody could get in!

After we read in Exodus 40 that not even Moses was allowed to enter the tent of meeting, what is the very next thing we find in Scripture?

Speak to the sons of Israel and say to them, 'When any man of you brings an offering to the LORD, you shall bring your offering of animals from the herd or the flock. If his offering is a burnt offering from the herd, he shall offer it, a male without defect; he shall offer it at the doorway of the tent of meeting, that he may be accepted before the LORD. (Leviticus 1:2-3)

G-d provides the Israelites with instructions on how to enter into His presence!

But why do they need special instructions for that? 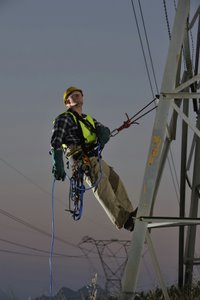 We should consider that a person cannot come in contact with a 50,000 volt live wire unprepared and expect to escape unharmed.

In a similar manner, the Israelites could not expect to come in contact with the glory of the Living and Eternal G-d without the proper preparation.  After all G-d is holy, holy, holy!

A person cannot come in contact with a 50,000 volt live wire unprepared and expect to escape unharmed.

Just like an electrician needs thick gloves, boots, and clothing to insulate them from the 50,000 volt wire that could kill him if mishandled, so too the Israelites needed a covering to insulate them from G-d's awesome presence.  The "protective covering" that G-d provided for them was "the blood of bulls and goats".  That blood did not remove their sin but it provided a covering for their sin to allow them to enter into G-d's presence.

Think about Nadab and Abihu, Aaron's sons.  They attempted to approach G-d with "strange fire" and were killed (Leviticus 10:1-3).  Scripture does not indicate that G-d was angry at them and smote them (like He did with Uzza and the ark in 1 Chr 13:9-10). They just suffered the consequence of approaching G-d's holiness unprepared.  Just like a 50,000 volt live wire isn't angry with the persons it kills, they are dead nonetheless.

Moses makes the point clear in Leviticus 10:3: "It is what the LORD spoke, saying, 'By those who come near me I will be treated as holy...'".

So what about the blood of bulls and goats... did that save them or somehow grant the Israelites forgiveness?

1 John 1:9 tells us "If we confess our sins, He is faithful and righteous to forgive us our sins and to cleanse us from all unrighteousness."

This declaration of G-d's faithfulness and righteousness was 100% true when John recorded it in the first century.

This same declaration is true for us today.

We know this declaration is true throughout all time (including the time of Moses!) because G-d never changes (Malachi 3:6, James 1:17).

Consider the days of Noah and Abraham, Moses and Joshua, David and Solomon.  How were people saved and forgiven their sins in those times?  They were saved by grace through faith (Ephesians 2:8), confessed their sins, and G-d forgave them and cleansed them of all unrighteousness... just as He always has.

What was different during the times of the Tabernacle compared to now?

G-d's was present with the Israelites in a very physical and tangible way.  Rather than lifting up their prayers to an invisible G-d seated in the heavens, the Israelites could literally walk down the street to the place where G-d's presence physically and visibly dwelled in their midst.

Israel was given the honor of meeting with G-d in physical and tangible way...

Sinful and unclean as they were (as we all are!), they were not allowed to enter into G-d's presence unprepared.  G-d had ordained an entire tribe to serve the Israelites and prepare them to physically meet with G-d: the Levites and the Aaronic priests.

The priests walked them through the steps required to prepare them to come before the tent of G-d's presence where they could confess their sins.  If they did so in faith then they were forgiven.  G-d knew their penalty would be paid as the result of the work of Messiah.  Indeed the names of those who are saved and belong to Him were written from the foundation of the world in the book of life of the Lamb who has been slain (Revelation 13:8).

Rather than having the "burden" of having to perform the sacrifices, Israel was given the honor of meeting with G-d in physical and tangible way that we today are not (yet!) permitted to enjoy.

Sacrifices In the Kingdom

Isaiah 56:6-8, Zechariah 14:16, Jeremiah 33:15-18, and Ezekiel 43:18-46:24 all clearly indicate that animal sacrifices will be a part of the future millennial reign of Messiah.  The Ezekiel passage (beginning in chapter 40) provides details about the Temple and its sacrifices during that time.

If Messiah is our Passover Lamb (1 Corinthians 5:7) then why will we need a Passover lamb sacrificed in that future temple?

If Messiah is our sin offering (Romans 8:3) then why will we need a sin offering sacrificed in that future temple?

They will be necessary for the same reasons they were originally necessary: the sacrifices will enable those in the flesh to enter into the holy presence [kavod] of G-d dwelling in the future Temple.

Oh, LORD, may You hasten that day!

1. New American Standard(r) Updated Edition Exhaustive Concordance of the Bible with Hebrew-Aramaic and Greek Dictionaries.  Copyright (c) 1981, 1998 by The Lockman Foundation.  All Rights Reserved. [back]
2. ibid [back]