We recently received this question about Elijah's sacrifice on Mount Carmel: 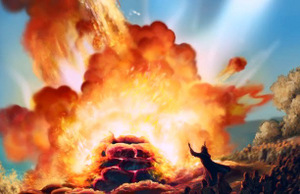 How are we to understand the sacrifice that Elijah offered on an altar on Mount Carmel in light of Deuteronomy 12:13-14?

Was Elijah's offering a sin?

Let's begin the answer with some historical context...

The account of Elijah's sacrifice on Mount Carmel is found in 1 Kings chapter 18.  1 Kings 18:30 says "and he repaired the altar of the LORD which had been torn down" on Mount Carmel.  "Repaired"... that meant there was already an altar there.  Note the words of Elijah:

He said, "I have been very zealous for the LORD, the G-d of hosts; for the sons of Israel have forsaken Your covenant, torn down Your altars and killed Your prophets with the sword. And I alone am left; and they seek my life, to take it away." (1 Kings 19:10)

Altars... plural.  Apparently there were many.  How could there be many altars?  Wasn't that a sin according to Deuteronomy 12?

Consider these words the LORD spoke to Moses:

'You shall make an altar of earth for Me, and you shall sacrifice on it your burnt offerings and your peace offerings, your sheep and your oxen; in every place where I cause My name to be remembered, I will come to you and bless you. If you make an altar of stone for Me, you shall not build it of cut stones, for if you wield your tool on it, you will profane it.  And you shall not go up by steps to My altar, so that your nakedness will not be exposed on it.' (Exodus 20:24-26)

When the kingdom of Israel was divided, the people of the north were unable to make offerings or sacrifices to the LORD in the temple in Jerusalem, so those who were faithful to G-d continued their worship of Him as best they could with their own individual altars constructed in accordance with Exodus 20.

Was this form of worship in violation of Deuteronomy 12?  Perhaps not.

The context established at the beginning of the Deuteronomy chapter 12 make it clear that G-d is commanding Israel not to make their burnt offerings in places where false gods had been worshiped.  The translators of the New American Standard Bible (NASB) acknowledged this context in verse 13 by specifying "Be careful that you do not offer your burnt offerings in every cultic place you see..."  The message of Deuteronomy 12 is essentially this: don't bring the worship of the LORD into a place constructed for idolatry and the worship of false gods; don't sacrifice to the LORD in pagan temples on pagan altars.

Is that what Elijah was doing?

Elijah restored the altar of the LORD, built it with twelve uncut stones, arranged the wood, placed the ox on the wood, and then doused the entire thing with twelves pitchers of water (four pitchers emptied three times).  At the time of the evening sacrifice, he called upon the LORD.

Then the fire of the LORD fell and consumed the burnt offering and the wood and the stones and the dust, and licked up the water that was in the trench. When all the people saw it, they fell on their faces; and they said, "The LORD, He is G-d; the LORD, He is G-d!"   (1 Kings 18:38-39)

If Elijah was sinning by offering this sacrifice in violation of Deuteronomy 12 then it is highly unlikely that the LORD would have responded to his petition and shown up in such a dramatic and powerful way.

Holy, Holy, Holy is the LORD G-d Almighty, Who was and Who is and Who is to come.  Blessed be the Name of the LORD.