Then the LORD called to Moses and spoke to him from the tent of meeting, saying,

Kahrah is the root of other Hebrew words:

The first time kahrah is used in Scripture is in Genesis 1:5.

G-d called, the light day, and the darkness He called night. And there was evening and there was morning, one day.

The last time kahrah is used in Scripture is in Malachi 1:5.

Though Edom says, "We have been beaten down, but we will return and build up the ruins"; thus says the LORD of hosts, "They may build, but I will tear down; and men will call them the wicked territory, and the people toward whom the LORD is indignant forever." 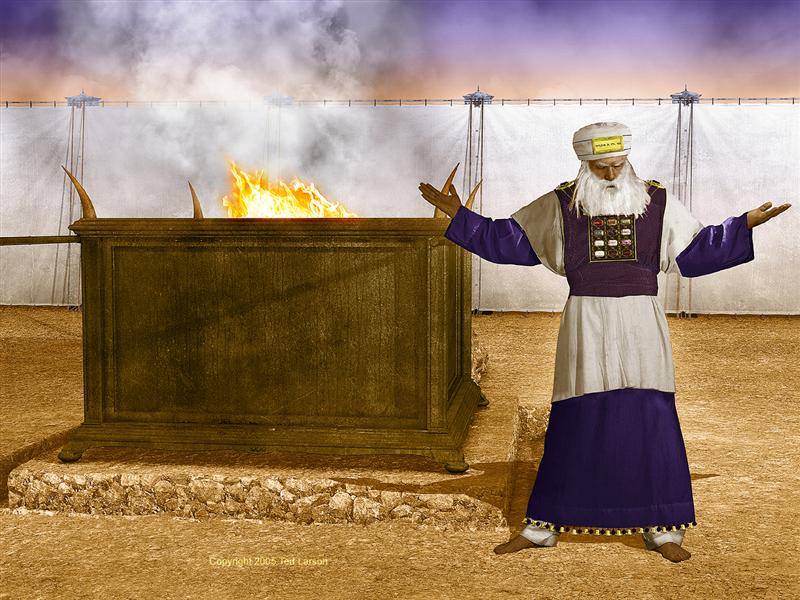 Leviticus chapter 3 provides instructions regarding the peace offering (shelemim). In Romans 5:1, Sha'ul says "we have peace with G-d through our Lord Yeshua Ha Mashiach". The peace offering then is a picture of Messiah.

Leviticus 1:2
"Offering" in this an many other passages of the Torah is the Hebrew word קרבּן ( korban - plural korbanot). Unlike the pagan or heathen understanding of this term the Hebrew word has no sense of appeasement or penalty. Korban comes from a Hebrew root word which means "to bring near". When we gather our children to ourselves to hug them or correct them we are "bringing them near". It is same sense of "bringing near" that is infused into the word korban.

Leviticus 1:9
The entrails and the legs of the korban are to be washed with water. What is the significance of this? It may be to cleanse fecal matter from the legs and digestive tract so it is not offered and/or burned up on the altar. The symbolic significance as it relates to Messiah is (at present) a mystery.

The olah [burnt offering] is described as a soothing aroma to G-d.

Leviticus 3:1
"Now if his offering is a sacrifice of peace offerings..." Using our new vocabulary term korban we can view this as "Now if the korban is a slaughtered peace offering...". The word translated "peace offering" here is shelem which is related to the word shalom [peace].

In the remainder of the chapter we see these common items:

Leviticus 3:2
"He shall lay his hand on the head of his offering". This is the Hebraic picture of imparting authority. A teacher would lay his hands upon a student's head when the student was ready to go out and speak on behalf of the teacher. The student would go forth in place of the teacher. So, too, we see those bringing a peace offering lay their hands upon its head as if to impart authority to the animal for it to go forth in their stead.

Leviticus 3:9
There are a three types of korbanot described in this chapter: male or female cattle, male or female sheep, or mail or female goats. Verse 9 points out the only significant difference between how the three are described. For sheep "the entire fat tail which he shall remove close to the backbone" is an additional instruction.

This chapter provides instruction for the offering to be brought in the even of unintentional sin.

Leviticus 4:1-12
The instruction here for the unintentional sin offering pertains to the anointed kohen [priest]. If the kohen sins so as to bring guilt on the people then he is to offer a bull without defect. The phrasing implies that the unintentional sin will be brought to his attention and he should bring the offering.

Leviticus 4:22-26
This passage relates to a leader of Israel who sins unintentionally. If a leader sins then he is to offer a bull without defect. The wording here is conditional noting that if his sin is made known then he is to bring the offering.

Leviticus 4:27-35
The instruction here for the unintentional sin offering pertains to one of the common people. If a common person sins unintentionally then he is to offer a female goat without defect. This is different from the other animals that are commanded possibly because a female goat would be much less expensive than a bull thus providing a lighter burden upon the commoner. The wording here is conditional noting that if his sin is made known then he is to bring the offering.

Leviticus 5:1
This verse speaks of the sin a person commits after he heard "a public adjuration to testify when he is a witness" to a matter. In the King James this is referred to as the "voice of swearing". If a person knows of a matter and hears a call to testify in a matter he commits a sin if he does not speak what he knows.

Yeshua stood silent before his accusers in the mock Sanhedrin trial (Matthew 26:63) until the high priest stands as says to Yeshua "I adjure You by the living G-d, that You tell us whether You are the Mashiach, the Son of G-d". Since Yeshua clearly knew about this matter and He heard "a public adjuration to testify" if He had not spoken at that point He would have sinned. It is at this point that Yeshua speaks and He avoided sinning in this matter.