"Now these are the ordinances which you are to set before them:.

Mishpat is a Hebrew word which properly means "a verdict" pronounced judicially and especially a sentence or formal decree: a judgment. Mishpat (Strong's #4941) is used 426 times in 403 verses in the Tanakh.

The first time mishpat is used in Scripture is in Genesis 18:19.

"For I have chosen him, so that he may command his children and his household after him to keep the way of the LORD by doing righteousness and justice, so that the LORD may bring upon Abraham what He has spoken about him."

The last time mishpat is used in Scripture is in Malachi 4:4.

"Remember the law of Moses My servant, even the statutes and ordinances which I commanded him in Horeb for all Israel. 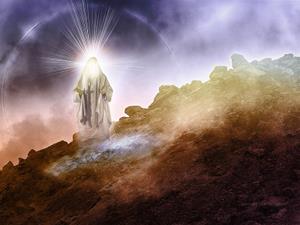 There is an extremely interesting passage at the end of this week's parashah:

Then Moses went up with Aaron, Nadab and Abihu, and seventy of the elders of Israel, and they saw the God of Israel; and under His feet there appeared to be a pavement of sapphire, as clear as the sky itself. Yet He did not stretch out His hand against the nobles of the sons of Israel; and they saw God, and they ate and drank.

This passage tells us (twice!) that Moshe and the others saw the G-d of Israel! They also ate and drank with Him. We know that the only tangible manifestation of G-d is the Son. The Father is Spirit and the Spirit is Spirit. The gospel of Yochanan [John] tells us that "no one has seen G-d at any time".  It must have been a pre-incarnate form of Messiah that was present with them.

What is the difference between a "commandment" [mitzvah] and a "judgment" [mishpat]?

The commandments are given as commands: e.g. DO this thing; DO NOT do that thing.

"Do not judge according to appearance, but judge with righteous judgment."

G-d's righteous judgments are revealed in the words of Scripture. As always Messiah points back to Scripture where we can find G-d's words and G-d's standards.

In this week's parashah we find the first mention of the "Feast of Ingathering" in Exodus 23:16. This feast is more commonly known as Sukkot (see notes on Sukkot in The Moedim). This reference is interesting for several reasons. This is the first of only two references to this festival in the Tanakh using this phrase. The other reference is found in Exodus 34:22.

In referring to the "Feast of Ingathering" these passages in Exodus remind us of another time of harvest:

Behold, I say to you, lift up your eyes and look on the fields, that they are white for harvest.

The Hebrew word translated "ingathering" is asif which is is a masculine noun which literally means "a gathering in" (i.e. of crops). The Septuagint translates Exodus 23:16 and Exodus 34:22 with different Greek words: sunteliah (Strong's #4930) and sunagoge (Strong's #4864) respectively.

Sunteliah is a feminine noun which means "completion, consummation, end". This word is only used 6 times in the Apostolic Writings:

The passages in Matthew 13 are when Yeshua explains the parable of the tares in the field to his talmidim. In each instance where sunteliah is used it is used in the phrase "end of the age".

Then He left the crowds and went into the house. And His disciples came to Him and said, "Explain to us the parable of the tares of the field." And He said, "The one who sows the good seed is the Son of Man, and the field is the world; and as for the good seed, these are the sons of the kingdom; and the tares are the sons of the evil one; and the enemy who sowed them is the devil, and the harvest is the end of the age; and the reapers are angels. So just as the tares are gathered up and burned with fire, so shall it be at the end of the age. The Son of Man will send forth His angels, and they will gather out of His kingdom all stumbling blocks, and those who commit lawlessness, and will throw them into the furnace of fire; in that place there will be weeping and gnashing of teeth.

So it will be at the end of the age; the angels will come forth and take out the wicked from among the righteous, and will throw them into the furnace of fire; in that place there will be weeping and gnashing of teeth.

The Matthew 24 and 28 verses also use sunteliah in the phrase "end of the ages". Hebrews 9:26 is phrased in the NASB as "consummation of the ages". The end-times picture we get from the fall festivals (including Sukkot/Feast of Ingathering) is that it will be the end of an age and the beginning of the millenial reign of Mashiach (Rev 20:6).

Sunagoge is a noun which means "an assembly". This word is used 56 times in the Apostolic Writings. One of those instances is also from Matthew 13 immediately following Yeshua's explanation of the parable of the wheat and tares:

He came to His hometown and began teaching them in their synagogue, so that they were astonished, and said, "Where did this man get this wisdom and these miraculous powers?

As a side note James 2:2 is the only place in the Apostolic Writings where sunagoge is not translated as synogogue but is instead translated as "assembly":

For if a man comes into your assembly [sunagoge] with a gold ring and dressed in fine clothes, and there also comes in a poor man in dirty clothes, and you pay special attention to the one who is wearing the fine clothes, and say, "You sit here in a good place," and you say to the poor man, "You stand over there, or sit down by my footstool," have you not made distinctions among yourselves, and become judges with evil motives?