Now Jethro the priest of Midian, Moses' father-in-law, heard of all that G-d had done for Moses and for Israel His people, how the LORD had brought Israel out of Egypt.

Yitro is the literal Hebrew name of Moshe's father-in-law. Yitro means "his abundance." Yitro is also known as Hovav and Hovav means "cherished, favored, and beloved." Yitro (Strong's #3503) is used 11 times in 9 verses in the Tanakh. Every instance refers to the man called "Jethro" in English.

The first time Yitro is used in Scripture is in Exodus 3:1.

Now Moses was pasturing the flock of Yitro his father-in-law, the priest of Midian; and he led the flock to the west side of the wilderness and came to Horeb, the mountain of G-d.

The last time Yitro is used in Scripture is in Exodus 18:12. 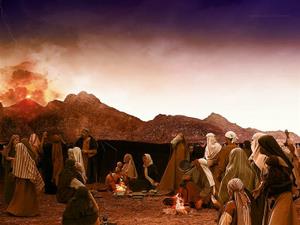 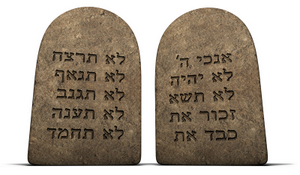 At Mount Sinai, G-d warns Moshe not to let the people "break through to the LORD to gaze, and many of them perish." (verse 21).  This is before the giving of the Ten Commandments [the Ten Words], and before the giving of the rest of the Law.  In verse 22, G-d commands Moshe, "Let the priests who come near to the LORD consecrate themselves, or else the LORD will break out against them".

Exodus 19:1, however, specifically states "In the third month after the sons of Israel had gone out of the land of Egypt, on that very day they came into the wilderness of Sinai."

This presents a difficulty.  Some say the elders were also considered "priests" by G-d before the Levites were ordained.  Others think that G-d gave Moshe an understanding of who the priests were to be in order to obey this commandment.  If you have any other ideas about this issue, please contact us and let us know so that we may share with others.

The anomaly of Chapter 18

As parashah Yitro opens we see a repetition of a specific phrase 3 times in the first 5 verses (Exodus 18:1-5): "Yitro... Moshe's father-in-law". Why the repetition?

It seems likely that anyone who has been reading the Torah up to this point would know who Yitro was. He was originally introduced back in Exodus 3:1 and mentioned again in Exodus 4:18 so why reiterate (3 times no less!) that this is "Yitro... Moshe's father-in-law"? It is enough to cause one to take a second look at this parashah... which may be part of the intent of the repetition.

Given that Yitro is a (pagan) priest of Midian it may be that Scripture wants to make it abundantly clear via the repetition that Yitro is not blood-kin relations with Moshe. He is an "in-law" and is not to be associated with the Levitical priesthood that G-d is establishing throughout the events of Sinai.

In Exodus 18:1 we see Yitro again described as "the priest of Midian". (See Yitro, Moshe's father-in-law for a list of Yitro's names). Midian is not only the name of a geographic region it is also the name of a person. Midian is first mentioned in Genesis 25:2 as a son of Avraham through his wife Keturah.

Yitro literally means "his excellency" and may be viewed as a title rather than a proper name. As such we can read Moshe's father-in-law being introduced as "His Excellency, the Priest of Midian".

Priest of Midian- the friend of G-d?

We first see "priest of Midian" in Exodus 2:16 when it describes seven daughters coming to water their flock. These are the same daughters Moshe helps as he is fleeing from Egypt. In Exodus 2:18 we see these daughters going to Reu'el, their father, and relating the story of Moshe's help. Reu'el means "friend of G-d". In verse 21 we see Reu'el giving his daughter Tzipporah to Moshe in marriage.

We first see Tzipporah in that verse (Exodus 2:21) and find her mentioned by name only 3 times in the whole of Scripture (including our "anomaly chapter"):

Does this foreshadow the future of Israel? It may be. The history given in Scripture paints a similar picture with Israel:

Additional insight may be found in examining Tzipporah's name. The name Tzipporah (Strong's #6855) comes from the Hebrew word which means "bird" (Strong's #6833). Considering "birds" in relation to a covenant a few references come to mind:

Genesis 15:9-10 tells us that Avram brought the animals that G-d commanded and made a covenant with Him. That list of animals included a turtledove and a young pigeon. Verse 10 notes that Avram did not cut the birds. As a picture of "the bride" this makes sense. We are to love G-d wholly (Deut 6:4) and not be of two parts (i.e. "double minded" James 1:7-8).

Exodus 18 also tells of two sons between Moshe and Tzipporah:

Very little is mentioned of these sons. It is as if there is a desire for them to not be given much attention (as would likely be the case as Moshe's heirs). The focus of Scripture here is the betrothal of Israel to her "husband" (G-d) and the commandments that make up the betrothal covenant.