Now when Pharaoh had let the people go, G-d did not lead them by the way of the land of the Philistines, even though it was near; for G-d said, "The people might change their minds when they see war, and return to Egypt."

Shalach is a primitive root which means "to send". Shalach (Strong's #7971) is used 995 times in 790 verses in the Tanakh. It is the same root word that is used in Parashah Vayishlach.

The first time shalach is used in Scripture is in Genesis 3:22.

Then the LORD G-d said, "Behold, the man has become like one of Us, knowing good and evil; and now, he might stretch out his hand, and take also from the tree of life, and eat, and live forever"

The last time shalach is used in Scripture is in Malachi 4:5.

"Behold, I am going to send you Elijah the prophet before the coming of the great and terrible day of the LORD. 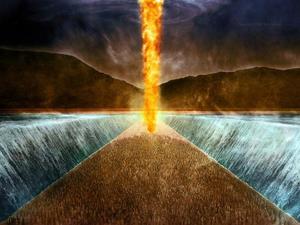 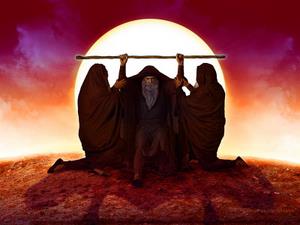 In Exodus chapter 17 we see a foreshadowing of Yeshua upon the cross: Moshe goes up a hill to "stand in the gap" for his people. While upon the hill he stretches out his arms and a man is on either side of him (Ex 17:9-12). In a very similar way we see Yeshua go upon the hill of Golgotha, stretch out his arms to be crucified, and has a man on either side of him (John 19:17-18). 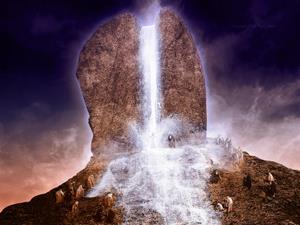 Paul tells the believers in Corinth that Messiah was present with the Israelites during the Exodus:

The rock from which they drank was the rock at Horev:

So Moses took the rod from before the LORD, just as He had commanded him; and Moses and Aaron gathered the assembly before the rock. And he said to them, "Listen now, you rebels; shall we bring forth water for you out of this rock?" Then Moses lifted up his hand and struck the rock twice with his rod; and water came forth abundantly, and the congregation and their beasts drank.

As a result of striking the rock twice G-d admonishes Moshe and says this:

But the LORD said to Moses and Aaron, "Because you have not believed Me, to treat Me as holy in the sight of the sons of Israel, therefore you shall not bring this assembly into the land which I have given them."

The rock was a spiritual rock... a manifestation of G-d's presence.

There are numerous "first uses" of certain Hebrew words in this parashah:

This is the parashah that comes before Tu B'Shevat, the New Year for Trees. In Leviticus 19:23-25 we are given commandments regarding the fruit of trees. For three years after a tree is planted the fruit belongs to Adonai and it is forbidden to eat it. The passage notes "in the fourth year" not "in its fourth year" so the Sages took this to mean that there were to be specified years for trees. Since the Torah did not explicitly mention when the new year for trees began there was much debate about when it should start. The house of Hillel and the house of Shammai each made rulings on this date: Hillel on the 15th of Shevat and Shammai on the 1st. As with most other rulings, Hillel's more lenient ruling was chosen.1

Why is this interesting? It is interesting because in this parashah we see G-d showing Moshe a tree that caused the bitter waters to become sweet (Exodus 15:25).

Getting the "big picture"

This section comes from some wonderful insights the Lord has shared through a dear friend, Brent Bell, this past Shabbat (01/19/2008). Brent's faithful dedication to the study of the Word has brought this information to light for our group. Many thanks to Brent for sharing this blessing and to Our G-d and Father who is the source of all blessings!

This week's parashah contains a particularly incredible and exciting message! In this parashah we find language used that has not been seen since the original week of Creation. There are also a number of Hebrew words that are used for the very first time in this parashah. Here we also find the narrative of the crossing of the Yom Suf (Red Sea).

To grasp some of the wonderful depth of the information in this week's portion let's begin with a few definitions to aid our understanding:

OK... enlightened with these definitions let's move forward! Or... backward as it were. Some of the "big picture" events in this passage are mirrors of events from the beginning of creation. So let's go there to get our foundation:

In Genesis 1:2 we see that the "ruach elohim" (Spirit or breath of G-d) hovered over the surface of the waters.

In Genesis 2:7 we see G-d "breathe" into Adam's nostrils and he became a living being.

G-d warns Adam not to eat of the fruit of the tree of the knowledge of good and evil "for in the day that you eat from it you will surely die". However, we see clearly from Scripture that the day Adam ate of it he did not die. He was running around with his wife sewing together clothes to cover their nakedness! Did G-d lie?

G-d created Adam as a being without sin and thus G-d could directly interact with Adam without any separation. This would include G-d directly providing life to Adam. How did G-d originally give life to Adam? Genesis 2:7 says G-d breathed into him. Once Adam sinned there would have been a barrier, a "separation" between him and G-d (Isaiah 59:2) so G-d would not have been able to continue to breathe into him. This may sound like speculation but let us consider the following passage that occurs after Adam sins:

Why does Scripture tell us what the weather was like when they heard G-d walking (halak-ing)? "The temperature was 65 degrees and partly cloudy. The forecast calls for continued mild temperatures and a few low clouds towards evening." Is this what we are being told?

If we examine the Hebrew closely it does not say this passage occurred in the "cool of the day".The Hebrew reads לרוּח היוֹם (l'ruach hayom): the day of breath/spirit.

It was the time of the day (or more literally the day) when G-d re-breathed life directly into Adam. At this particular time Adam and Chavah heard G-d halak-ing (walking/living) righteously and knew they were no longer righteous because of their sin. Let's pause there and jump forward to this week's parashah...

Then Moses stretched out his hand over the sea; and the LORD swept the sea back by a strong east wind all night and turned the sea into dry land, so the waters were divided. The sons of Israel went through the midst of the sea on the dry land, and the waters were like a wall to them on their right hand and on their left. 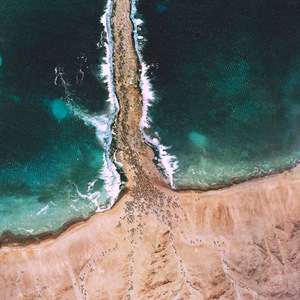 The word "swept" in the passage above is our Hebrew word halak and "wind" in the verse is ruach again. The Hebrew literally reads "and YHVH [G-d] Himself 'walked' the sea [back] in a strong east wind all the night". In this passage we see G-d halak-ing the waters. Centuries before Yeshua walked the earth and walked on the Sea of Galilee near His talmidim (Mark 6:48- part of this week's readings) G-d walked the Red Sea near his people, Israel.

What happens in Genesis? Adam walks righteously with the Lord until he sins and thus begins the series of events that will lead to the Flood of Noach where the "waters above" and the "waters below" come back together in G-d's judgment of the wickedness of mankind. We see this picture repeated in this week's parashah.

So Moses stretched out his hand over the sea, and the sea returned to its normal state at daybreak, while the Egyptians were fleeing right into it; then the LORD overthrew the Egyptians in the midst of the sea. The waters returned and covered the chariots and the horsemen, even Pharaoh's entire army that had gone into the sea after them; not even one of them remained. But the sons of Israel walked on dry land through the midst of the sea, and the waters were like a wall to them on their right hand and on their left.

Like in the Flood of Noach, here we again see G-d's judgment against the unrighteous by water.

You may have noticed that I highlighted "sea" and "water" in the verses above. Why do we see the variation between the two words? Did G-d want to throw in a little extra literary flavor so that He wouldn't sound repetitive? Indeed not. Every word of Scripture is chosen by G-d for a purpose.

Water is life-giving and is symbolic in the Hebrew mind of the Torah (the reasons why this is so are beyond the scope of this article). Hebrew men (such as King David in Psalm 19:7) describe the Torah as "perfect, restoring the soul" and Paul (in Romans 7:12) said the Torah was "holy, righteous, and good".

The sea, however, symbolizes the abyss and death. Earlier we noted that G-d is described in Scripture as "walking on the sea". In a literal sense this put them above the sea. The picture that we are given is that they are "above" or "in authority over" the sea/death. It is in this imagery that we see the Israelites going through a "baptism", a mikvah, where they symbolically go down into the abysss (death) and rise again alive. Paul makes note of this baptism in 1 Corinthians 10:1-2. So let's reconsider the message of the Exodus 14:27-29 passage with this new perspective:

So Moses stretched out his hand over [death], and [death] returned to its normal state at daybreak, while the Egyptians were fleeing right into it; then the LORD overthrew the Egyptians in the midst of [death]. The [Torah] returned and covered the chariots and the horsemen, even Pharaoh's entire army that had gone into [death] after them; not even one of them remained. But the sons of Israel walked on dry land through the midst of [death], and the [Torah] were like a wall to them on their right hand and on their left.

While relating this passage including the equation of water = Torah (or Law) we are reminded of a passage in Romans 2:

One picture we see in the Israelites' crossing of the Red Sea "on dry ground" is that the "waters" held back the "sea" or (put another way) the "Torah" held back "death" while the children of Israel walked (Hebrew: halak-ed) on dry ground.

Did you catch that?

The Song at the Sea

Exodus 15:1-19 relates the Song at the Sea. In it we find some interesting tidbits:

At the blast of Your nostrils the waters were piled up, The flowing waters stood up like a heap; The deeps were congealed in the heart of the sea.

The "blast" in the passage above is our Hebrew word ruach: the spirit or breath of G-d's nostrils piles up the waters. In Genesis 2:7 we see G-d "breathe" into Adam's nostrils and he became a living being. Here we see G-d's breath giving life to an entire nation. 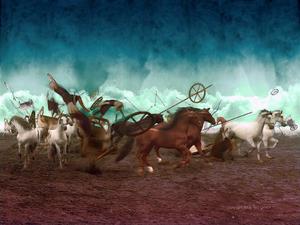 In Exodus 15:8 above we see G-d's Ruach blowing the waters into a "heap". The Hebrew word translated as "heap" is ned and it is the first time the word is used in Scripture.

You blew with Your wind, the sea covered them; They sank like lead in the mighty waters.

The Hebrew word here translated as "blew" is nashaph (Strong's #5398). It is the first of only two uses of nashaph throughout Scripture. The other is found in Isaiah:

This is in the midst of a passage speaking to Israel of G-d's power over the nations... that they should not be afraid of them but be in awe of Him.

Exodus 15:18 tells us that "The Lord shall reign forever and ever". This message is repeated in: