G-d spoke further to Moses and said to him, "I am the LORD; and I appeared to Abraham, Isaac, and Jacob, as G-d Almighty, but by My name, LORD, I did not make Myself known to them.

The name of this week's parashah, וארא (va'eira) comes from the Hebrew root word ra'ah. It is a primitive root verb which means "to see". Ra'ah (Strong's #7200) is used 1308 times in 1198 verses in the Tanakh. It is the same word that forms the root of the word which names Parashah Vayera.

The first time ra'ah is used in Scripture is in Genesis 1:4.

G-d saw that the light was good; and G-d separated the light from the darkness.

The last time ra'ah is used in Scripture is in Malachi 3:18.

So you will again distinguish between the righteous and the wicked, between one who serves God and one who does not serve Him. 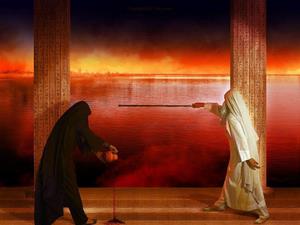 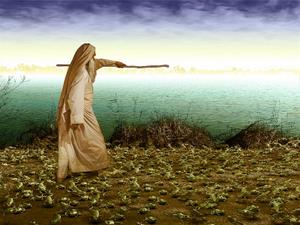 The plagues are examined in more detail in The Plagues of the Exodus article.

In the beginning of the parashah the Torah tells us that G-d speaks to Moshe and tells him that He did not make Himself known to the patriarchs by his Name, י-ח-ו-ח. We find, however, in Genesis 21:33 that Avraham plants a tamarisk tree at Be'er-Sheva and calls on the name י-ח-ו-ח. If G-d did not make this name known to Avraham then how did he call upon it? Did Avraham pull a Rumpelstilskin and guess his name or have someone else tell him? This ties back directly to last week's parashah's notes on G-d's Name.

The word used in the Torah for "make myself known" is נוֹדעתי (noadeti) and is a conjugation of the Hebrew root word yada. The word has the sense of "to know by seeing" and in this case we might interpret this passage as "I did not show myself" in the aspect that G-d did not reveal his character as י-ח-ו-ח. The patriarchs knew Him (saw Him) as El Shaddai, G-d Almighty, but they did not know of his character as the eternal, unchanging (and covenant keeping) G-d.

G-d made a covenant with Avraham which was passed on to Yitzchak and Yaakov but they did not see the promise of the covenant come to pass. They did not know of G-d's character as "the one who delivered upon the promises of the covenant". It was their descendants (hundreds of years later) that were brought up out of Egypt and their descendants who actually entered into the Promised Land. It was these descendants that came to know (through what they saw and experienced) of G-d's covenant keeping nature.

What is special about the staff? 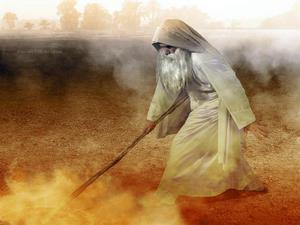